Hey guys, apologies for no Round 28 Ramble, when planning my week I hadn’t taken into account the round continuing until Thursday evening, then I didn’t have enough time to write anything before Round 29, so I have once again combined both rounds for this piece.

What a horrible month it has been for Arsenal! Following their 5-1 victory over Everton in Round 26, they have only won 1 match in the next month – a 0-3 Europa League victory at Östersunds FK – losing 1-0 at local rivals Spurs and 1-2 in the home leg of their Europa League tie (going through 4-2 on aggregate), before losing 0-3 to Manchester City twice in a week in the Carabao Cup final and the league, before Sunday’s embarrassing 2-1 loss at Brighton. These results have left them with little chance of qualifying for the Champions League through the Premier League as they are now 13 points behind Spurs, who currently occupy 4th. West Brom’s troubles continue and their 3 league wins all season (1 under Pardew) leaves them rock bottom of the league 8 points behind Southampton in 17th. Crystal Palace currently have an injury list longer than their list of league victories this season and currently sit just within the relegation zone level on points with Stoke and 1 behind Southampton, while Swansea, West Ham, Huddersfield and Newcastle are all within 3 points of the relegation zone.

Jobs available in the Big 6?

With the way things are going at the moment, I think there will be 2 vacant manager positions at Big 6 teams by the end of the season.

As mentioned above, Arsenal are on a dire run and a second year without Champions League football, combined with a series of shocking performances in defeat, will surely spell the end of his reign. He has given so much to Arsenal over the years that I hope he is given the chance to walk rather than being sacked, however I cannot see how he can remain in the job another season. Despite finally spending big money on players like Alexandre Lacazette and Pierre-Emerick Aubameyang and signing Mesut Özil to a new contract, they were unable to keep hold of Alexis Sanchez and their results have been awful compared to the teams they should be competing against. They may have improved their attack, but even though they gained Aubameyang and Henrikh Mkhitaryan, they lost proven influential players in Sanchez and Olivier Giroud to their rivals. Their defence is also shocking still despite a couple of signings in recent years. There is no pace in the centre and little confidence throughout the defence, while Petr Cech is nowhere near the keeper he used to be any more and should have done much better for both goals against Brighton. Too often as well the midfield and attackers only seem interested in going forward rather than helping the defence, the balance is completely off in the squad and it needs sorting for next year if they are to have any chance of making it back into the Champions League.

As it currently stands, Chelsea are also looking at a season without Champions League football as losses to United and City have left them 5 points behind Spurs – not the way they would have wanted to defend their title! Antonio Conte has a squad full of quality but when you look at some of his squad selections, you would not think so. Chelsea have shelled out almost £90 million for strikers Alvaro Morata and Olivier Giroud this season after deeming Diego Costa surplus to requirements, but in a big game against City’s arguably shaky defence, Conte chose to keep Giroud on the bench until the 78th minute and Morata until injury time, instead playing Eden Hazard in a false 9 position that will not trouble the best teams enough. Giroud is getting used to a new team and Morata a new league, but if Conte is not willing to keep faith with them how will they adapt and be able to excel in this team? It does not sound as if Antonio Conte is happy at Stamford Bridge and I expect to see a new man take the reins this summer.

Hanging refs out to dry

If stories in the last week are to be believed, VAR will not be utilised in next season’s Premier League matches. What a ****ing joke! I understand that there are still some kinks to be ironed out, but there are so many wrong decisions being made that are costing teams vital points. Only 7 points separate Brighton in 10th from Stoke in 19th, so a couple of dropped points (or worse, goal difference) due to a bad decision could be the difference between Premier League survival and playing in the Championship next season. 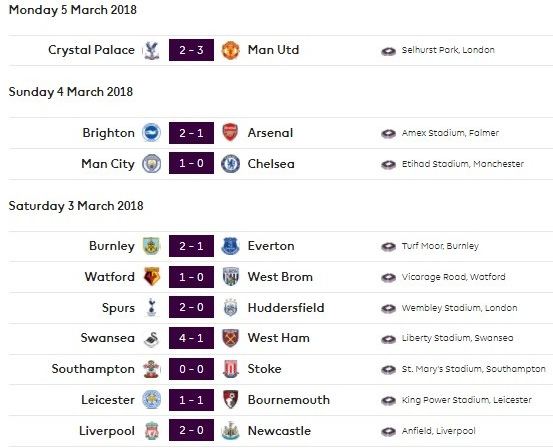 It wouldn’t be so bad if the officials were making the right decisions but anyone who reads this series on a regular basis will know that they’re not! In fact I’d argue there is on average at least one completely wrong decision per week! Some of them you can see why the officials may have given the decision they did, but can someone explain to me how Charlie Daniels can be clearly shoved over in the box and not get a penalty? Dele Alli should have also won a penalty against Crystal Palace in Round 28 with the score at 0-0, though I wonder if the decision wasn’t given due to his history of diving. It’s the most blatant penalty I’ve seen in weeks! If a referee and 2 linesman are still struggling to consistently make the right decision, they need that technology to help get the calls right as soon as possible. Football is a big-money business, but technology-wise, it needs to come out of the Dark Ages.

As an aside while writing about officials, I don’t understand how a referee can interfere with play and then allow the game to continue! Bobby Madley (who I praised in Round 25) arguably cost Burnley the game in their Round 28 match against Southampton by blocking off Ashley Westwood from a pass leading to the Southampton equaliser, before then not giving a penalty for a pull on Ashley Barnes in the box. Maybe I am coming from too much of a rugby background, where a referee would stop the game and award a scrum to the team in possession if the ball hits him or he blocks a tackler, but I don’t see how an official should be able to influence the match in such a way. I have a lot of sympathy for Burnley and their fans as that is 2 points lost that they should have had, while a Burnley win would still see Southampton in 17th but only due to goal difference rather than a 1 point advantage.

Both images in the text are from http://www.premierleague.com

Tim Etheridge Big fan of sports, Star Wars and the Schmoedown. Follow Eyes on the Ball for sports and Schmoedown thoughts and The Canon Padawan for Star Wars talk
Published March 7, 2018