The King of the Geeks & the Classy Contender

With 2 matches a week (on average) in the Schmoedown, some weeks are there to further storylines, some to introduce new faces and some are all about the road to the belts. This last week was all about the belts! Tuesday saw the Lion’s Den’s newest cub Mark “The Enforcer” Donica try to wrest the Innergeekdom belt from Jason “Justice” Inman, only to be TKO’d by the champ. On Friday, the Fyffe Club’s decision to pick Mike “K.O.” Kalinowski as “Classy” Clarke Wolfe’s opponent for her Number 1 Contender match as he took her to Sudden Death, only for Clarke to emerge victorious and set up a title shot against Samm Levine. 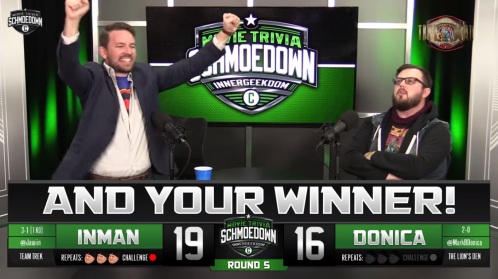 Jason Inman is going to be hard to beat! The Champ proved his title credentials with a strong display against Mark Donica, who performed well but could just not keep up. Inman only missed one question in Round 1 to take an early 9-7 lead and despite being part of Team Trek, he still managed to get 8 out of a possible 10 points in Round 2 after spinning Star Wars, matching the score Donica had amassed on MCU. Things stayed even through Round 3 as both failed to identify what animal the battering ram Grond was styled on, but both had bet 2 points on the question. While Inman may have already been ahead following Round 1, it was Round 4 where Inman all-but confirmed his victory by dominating the speed round, taking the first 4 questions often before Donica could even seem to react. Donica got the final point of Round 4 and also had success with his 2-point question in Round 5, but he could not pull the right answers for his 3 and 5-point questions to hand Inman a TKO victory and his first title defence.

Donica performed admirably in this match but I think a lack of experience in the longer format cost him a chance of victory here, very similar to when Samm Levine was able to beat Rachel Cushing in the last Singles title match and I plan to write more on this in the near future. That said, Jason performed so well and seems to have very few weaknesses, being especially strong in categories like Star Trek where many competitors appear to struggle. With his title match experience and his wide range of knowledge, I think it’s going to take something special for a competitor to dethrone him any time soon. Donica will certainly come back stronger and this title shot will have given him an idea of what he needs to work on to take the next step. He clearly has good subject knowledge and understands the game and the rules as shown by his usage of the JTE Rule and the Challenge Rule – though I fully agree with the judge’s decision to stick with the original ruling of an incorrect answer. Kristian Harloff has already announced that there will be 5 Innergeekdom 1v1 matches in the near future, with the winners of these matches facing off in a Fatal Fiveway to determine the next Number 1 Contender. If Donica can come through both these matches and earn another title shot then I would say he has as good a chance as anyone of beating Inman.

But looking ahead to the future, who will Donica be facing first? Well if his post-match comments are anything to go by, we will be seeing him face off against the leader of the Viper Squad, Jay Washington! I always enjoy a match between 2 rival heels as you never know what they’re going to do next. Jay is hilarious on the mic and any change we can take to see him and Dagnino squaring off should be taken. I would expect Donica to win this game but Jay Washington can never be counted out and will want to make up for his loss in the Manager Bowl.

As for Inman, he still appears to be getting no offers to join a faction, which in my mind is absolutely crazy. The Fyffe Club seemed more interested in Donica despite the way he had already been looking comfortable with the Lion’s Den and I would not be surprised to see at least 2 of Cushing, Fyffe and Andreyko appear in the 5 Innergeekdom matches, while I still expect the Horsemen to make an advance sometime soon. I’m starting to wonder though if Inman will choose to create his own faction. Trek teammate Scott Mantz would surely jump at the chance to join the faction and Yodi’s appearance walking out with Inman makes me wonder if he would join as a manger given his experience in both Singles and Teams to help this become another faction to help cut the heels down to size. 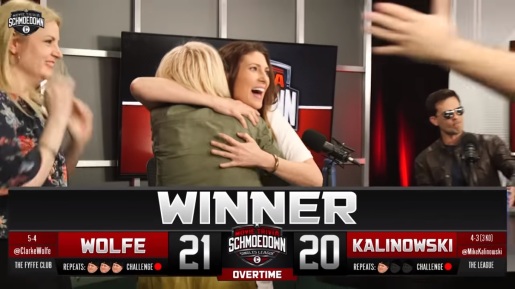 A match awarded to Clarke following Emma Fyffe’s victory at the Manager Bowl, Kalinowski or Stacy Howard appeared the obvious choices for her opponent given the strength of the top 10. Kalinowski has been on a poor run of form since the end of the 2017 Ultimate Schmoedown tournaments, but Friday’s match saw him return to the form that earned him a place in the Number 1 Contender Triple Threat match against Rachel Cushing and JTE.

Things were looking good for K.O. as he came out of Round 1 with a 6-5 lead and followed things up by scoring 6 out of a possible 8 points having spun Spielberg in Round 2. Clarke may have an up-and-down history with the wheel, but it was certainly on her side this time as she spun arguably her biggest strength, Horror, and took maximum points for the first time in her singles career to go 13-12 up. Round 3 was another incredibly close affair with Clarke hitting her 2 and 5-pointers and K.O. his 3 and 5-pointers to take the match to Sudden Death, where Clarke won on the first question to seal her place in the next title match against Samm Levine.

It was great to see Kalinowski competitive in the Schmoedown again and but for a moment in Round 1 he would have had the victory. Having initially written an answer for the sixth question, Kalinowski changed his mind at the last moment and used his second JTE rule to give him the time to change his answer. Unfortunately for K.O. his initial answer was the right one. Had he stuck with his gut or been a second later calling for the JTE rule, the extra point would have seen him take the victory inside 3 rounds.

Looking ahead, it will be interesting to see how the title match goes and while I would lean towards Samm Levine due to his extra experience of title matches – though Clarke has featured in title matches previously against Dan Murrell and The Patriots – Clarke actually has a 1-0 singles record against Samm after beating him in 2016 to set up her title match against Murrell. Samm has clearly improved since then but if the questions go her way, Clarke certainly has the ability to pull off the win and become the first female to hold a belt.

As for Kalinowski, his future is perhaps even more interesting right now. As I have already mentioned this month, K.O. is yet to be seen in the company of The League, and in his post-match interview he mentioned how when he looked out into the audience he didn’t see any of his faction there to support him. His next comment though was very interesting:

“I saw one person out in that audience – and I’m not gonna say who it is right now – but they were there and they had my back, someone that I would never have thought and someone that’s not… we’re never in the same thing… but made me think during the match”

I’ve been suggesting for a while now that Kalinowski joining Rocha’s stable as a member of the new 4 Horsemen makes sense and sure enough, if you go back to Round 1 and the question where Kalinowski second-guesses himself, you can see a moment of frustration from K.O. then hear Rocha shout out from the audience “Trust yourself”, words that appear to snap K.O. back into the moment and he repeats these words to himself a couple of times to focus himself for the next question. I honestly think it’s just a matter of time now until he becomes the newest Horseman. Perhaps during Rocha’s match against Jeff Sneider…?

What were your thoughts on the matches? Do you think Clarke will beat Samm? What factions do you see Inman and Kalinowski representing? Who do you want to see in the 5 Innergeekdom matches? Let me know in the comments, lets get the discussion going.

Tim Etheridge Big fan of sports, Star Wars and the Schmoedown. Follow Eyes on the Ball for sports and Schmoedown thoughts and The Canon Padawan for Star Wars talk
Published April 29, 2018