The farce surrounding Spain’s loss to Belgium – and Romania’s subsequent qualification for the World Cup – continued this month as it was announced that 5 players were receiving bans totalling over 2 years! Brothers Sebastien and Guillaume Rouet received 43 and 36 week bans respectively, while teammates Pierre Barthere, Lucas Guillaume and Mathieu Bélie each received bans of 14 weeks.

I’ve seen the footage of the incident and it does not make easy watching. The behaviour of some of the Spanish players was deplorable and they certainly deserve to be punished for their actions. What rankles me is that the chance of an incident was allowed to happen in the first place. For such an important match where World Cup qualification was on the line, the officials should be completely neutral. Yes the Romanian officials were neutral to judge it by an individual match, but considering Romania stood to qualify if Spain lost there is no way Romanian officials should have been allowed. Granted the officials were appointed before the tournament, but on the same weekend a South African official was removed from the England v Ireland match late in the day as he had been with England during the week, Rugby Europe – who have a Romanian as President – in my opinion have no legitimate reason as to why they could not change the officials. Maybe the match would have gone the same, but at least the calls of bias would have been unfounded.

World Rugby were investigating this and also the suggestion that Spain, Belgium and Romania all fielded ineligible players during the tournament but everything has gone quiet on that front other than the announcement of the bans. Too often it appears that World Rugby are hesitant to change the status quo and with usual competitors Romania now set to feature in Japan, if fear that the investigation and findings will be swept under the rug in a similar way to France’s abuse of Head Injury Protocols over recent seasons. I really hope World Rugby prove me wrong…

One player who did escape punishment this month was Israel Folau. Folau caused outrage following his comment on Instagram that God’s plan for gay people was “HELL… Unless they repent of their sins and turn to God”, yet he escaped punishment from the ARU after explaining his views and religious beliefs to them.

Now I have no problem with freedom of speech and also with religious beliefs – though I would not consider myself especially religious. My issue is that Folau is not just some random member of the public, he is one of Australia’s star players and as such he is meant to be a role model to others. Folau has a responsibility to be careful what he says on social media as it will get around to millions of people in no time. Further to this he is making a conscious choice to use passages from the bible that are against homosexuality, but conveniently doesn’t appear to follow the Bible fully as it is stated in Leviticus that ”You shall not make any cuttings in your flesh for the dead, nor tattoo any marks on you: I am the Lord.” If you can ignore your religious beliefs to get a bit more ink, don’t use them as an excuse to get out of being a homophobe. 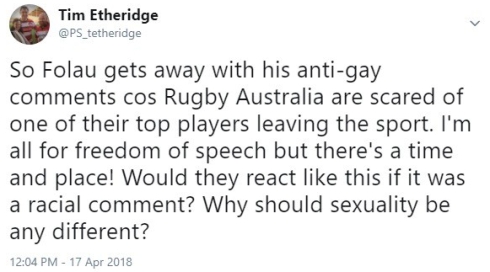 The ARU have panicked and avoided punishing him because he is out of contract soon and they are afraid he will walk away from the sport. That Denny Solomona can be banned for likely using a homophobic slur, Folau commenting on social media that gay people can go to Hell definitely deserves a ban. I wonder how the ARU would have acted if the question was about people of a different religion rather than a different sexuality.

Following his comments, it was great to see both Brad Weber and TJ Perenara come out against his remarks. I’d love to hear David Pocock’s views on Folau’s comments considering how supportive he was of legalising gay marriage in Australia. That next training camp with the national team could be a little tense…

It’s that time of year where the lists of players hanging up their boots at the end of the season start to come out. As always, there are so many quality players leaving the game that have become such a big part of our viewing over the years. One name that people would not have been expecting to see on those lists though is that of Northampton and Australia back Rob Horne.

At 28 years old, the former Waratah would have been looking forward to a successful couple of years with the Saints and it was suggested that he could be a potential captain next season. Unfortunately, in his first match as Northampton captain, he lasted just 13 seconds of their derby against Leicester Tigers before going off injured. Sione Kalamafoni jumped to catch the kickoff and as he came down, Horne appeared to catch him awkwardly. He went down immediately and did not look good trying to get up. Watching at the time, I assumed that he had got a stinger and possibly caught his head awkwardly. However, later that week it was announced that he had suffered nerve damage severe enough to bring an end to his career.

It is a sobering reminder of just how easy it is to pick up an injury and of how fragile our bodies really are despite us putting them on the line and making them take a beating for 80 minutes a week. I wish the best to Rob in his retirement and hope that he will get the support he needs both in his recover and his earlier-than-expected transition to life after rugby.

Tim Etheridge Big fan of sports, Star Wars and the Schmoedown. Follow Eyes on the Ball for sports and Schmoedown thoughts and The Canon Padawan for Star Wars talk
Published April 30, 2018