Legend of the game

It was announced right at the start of the month that England fullback and legend of the game Danielle “Nolli” Waterman would be retiring from international rugby. A star of the women’s game, Nolli made her England debut in 2003 and went on to earn 82 caps for the Red Roses, playing in 4 World Cups and scoring in the 2014 final. Having also spent some time with the England 7s team, her time with the 15s has been a little more limited in recent years, but she has still been consistently one of the best players on the park whenever she has featured and finishes her career with only 1 loss in the 6 Nations to her name – against France this year. She has been an outstanding servant to England Rugby and women’s rugby – in fact rugby as a whole! – and it will be a shame to no longer see her representing England. With the Barbarians having now created a women’s team I sincerely hope she becomes a regular in this while she continues to play at club level.

The good news for England fans is that her replacement already seems to be in place. Ellie Kildunne has had a wonderful season for Gloucester-Hartpury and England. She has pace, footwork, good handling skills and is also strong enough to hold her own against larger opposition. Having trained and played alongside Nolli with England this year, she will have learned so much and it is possible that in 15 or so years we may be looking back on an equally impressive career.

Congratulations Nolli and thank you for everything!

It feels like every time I write one of these recently we end up coming back to the absolute ****storm caused by Vlad Iordachescu’s refereeing of Spain v Belgium’s Rugby Europe Championship match that denied the Spanish qualification to the 2019 Rugby World Cup.

It was eventually announced this month that the match will not be replayed as Belgium successfully argued that having Romania officials for this match is no different than a team of officials from 1 country in the 6 Nations refereeing a match in the tournament between 2 other teams. In my eyes, that is absolute bollocks as this wasn’t just any old match, but a match that decided whether Romania or Spain qualified for the World Cup. When there is such a prize at stake, neutrality is a must and I would not call Iordachescu and his team wholly neutral in the circumstances.

On top of that, Spain have been deducted 40 points from the Rugby Europe Championship, with Belgium and Romania being deducted 30 points each, for fielding ineligible players. This means that Russia have qualified automatically, while Germany – who were due to have a playoff to avoid relegation – will now have a playoff with Portugal to play Samoa in the next round of qualification.

While I agree that punishments must be meted out for fielding ineligible players, it just shows how difficult World Rugby have made player eligibility in the past. Moving forward something needs to be done to make sure someone else doesn’t unknowingly play for an international team as they were not aware they were already captured by another nation.

Law 9.13 The acceptable height of the tackle is reduced from the line of shoulders to below the nipple line.

Tackles that increase the risk of head injury will be cited.

A tackler will be deemed to be upright when:

The High Tackle Warning is issued ONLY IF THE TACKLER IS UPRIGHT, AND THERE IS CLEAR AND OBVIOUS HEAD CONTACT for either player

High Tackle Warnings also form part of the usual accumulation of sanctions, including Citing Commissioner Warnings (CCWs) and yellow cards. A strong education element will be run in parallel, explaining that this player welfare initiative protects the tackler and their opponents.

While I understand the need for increased safety both at professional and grassroots level, I think the lowering of the tackle height will become a difficult one to police, while it is already hard enough for the tallest players to get low enough to tackle the shorter player as they try to step around them. The idea of a “High Tackle Warning” from a citing commissioner seems a good idea though as it will encourage better technique whilst it also appears to be fair to the tackler by looking at the effort they have made to lower the tackle. I just wonder if 2 strikes for a ban will be a bit too strict over a season of weekly club rugby, though if this works well in the World Rugby U20 Championship then I would be interested to see how well this works over a season of club rugby.

Jared Payne has not played since the Lions Tour due to repeated headaches and it has now been announced that he has been forced to retire aged 32 and take up a coaching role with Ulster, this is a timely reminder of how important player safety is. It may be softening up the game to a degree, but players are larger, stronger and faster than ever so anything that improves a player’s safety should be considered. 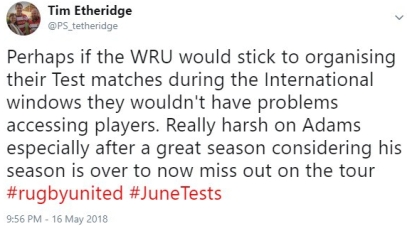 I was so happy when the Welsh squad for the June Tests was announced with Josh Adams included. He had such a good season for Worcester, finishing joint top try scorer in the Premiership, but was not given enough of a chance by Warren Gatland before being dropped during the 6 Nations. I was hoping that this June, he would get the chance to prove himself. Unfortunately, that chance will have to wait as he has been dropped from the squad along with Tom Francis and Luke Charteris.

The reason the players were dropped? As Wales are playing their opening match of the tour outside the international window, Premiership clubs are not forced to release their players, so the 3 players will be unavailable for the 1st Test and as such Gatland does not see the point in taking them. While I feel it is a bit pathetic of the Premiership Clubs to not release their players, especially considering Adams and Charteris have not even had any club matches to play the last couple of weeks, I put the blame firmly on the WRU.

The international windows are clearly defined, yet for some reason the WRU continue to arrange matches outside these periods and then complain that their players are not available to them. It is not a hard job to stick to a designated period of time, but for them it seems near-impossible. I really sympathise with Adams especially and hope that he is a regular in the Welsh XV soon.

Tim Etheridge Big fan of sports, Star Wars and the Schmoedown. Follow Eyes on the Ball for sports and Schmoedown thoughts and The Canon Padawan for Star Wars talk
Published May 29, 2018