Wheels coming off the chariot

England slumped to another disappointing defeat with a 23-12 loss to an improving South Africa which leaves them unable to win the June series. The team have now lost 6 matches in a row (yes Eddie, I’m counting that Barbarians match!) and if I’m completely honest I don’t see that streak ending next week.. 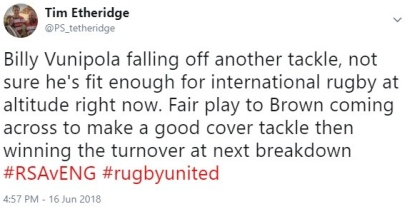 What has gone wrong for this team? From an outsider looking in, things don’t look great. Players continue to get long-term injuries in training sessions. Eddie Jones is moaning that he has 25 players unavailable for selection – I’d love to hear the list and see if it includes players he continues to overlook like Don Armand and Alex Goode – which makes it sound like he doesn’t trust the players (many of them regulars) that he has with him. Ben Youngs is giving one of the rudest post-match interviews I’ve ever seen – he later apologised but it still left a nasty taste in the mouth – while Mike Brown and Joe Marler got into a row with fans in the crowd. And all the while Eddie Jones appears to feel that discipline is not an issue, despite a ridiculous penalty count, a stupid infringement from Nathan Hughes – who so frequently looks out of depth at this level – that left England a man down for 10 minutes, a positively brainless penalty from Mako Vunipola for a slap on Pieter-Steph du Toit and a kick that Maro Itoje appeared to aim at Faf de Klerk at the exact same ruck as the Vunipola slap. Players who star every week for Saracens are repeatedly poor for England recently and in some cases are actually liabilities with their lack of discipline. George Ford has had his moments where he has looked great but has largely disappeared from games once the Boks started getting into the game, while Billy Vunipola did not look fit enough in either match (possibly not being helped by not training at altitude, not that Eddie feels this is an issue) and is now out again with a broken arm. Is Eddie the man to take us through to the World Cup? Right now, I have my reservations about him, but with just a 6 Nations and a handful of other Tests remaining, I’m not sure there is someone who could come in and get the team ready in time.

With the series lost, changes should be made for the final Test, if only to rest some players and give others a fair chance to show what they can do. I would have selected Ellis Genge at 1, but he is returning to England injured and Mako is also returning for family reasons, Alex Hepburn is flying out and while I would love to start him I think the space needs to go to Marler, who has been training with the squad. Jamie George’s form has not been up to the level everyone expected when given his chances to start and I think it is time to give Luke Cowan-Dickie a chance to prove he can move ahead of the Saracen. Kyle Sinckler is another who has not backed up his form from the Lions Tour and I think it may benefit England to start the stronger scrummager Williams, leaving Sinckler to come off the bench when the Boks get tired. I’m dropping Itoje from my starting second row as he has been a penalty machine and has been lucky not to be penalised more with the way he has targeted Faf de Klerk over the 2 Tests, so I would bring Nick Isiekwe back in to partner Joe Launchbury, with Itoje on the bench, no more of this going without a specialist lock replacement. Curry and Shields both impressed me in this game so I would keep them, while I would begin to look away from Hughes as an international number 8 and look at giving Sam Simmonds some more international experience, though I see his international future on the flank. Ben Youngs was poor at scrum half and it is time Dan Robson and Ben Spencer got their chance to prove themselves. I would happily start either of them, but I have gone for Robson to start due to his experience playing with Danny Cipriani, who I have picked at 10. He looked good in his 12 minute cameo on Saturday and now deserves the chance to depose George Ford. Owen Farrell keeps his place at 12 to give Cirpiani the same help Ford has had, while Slade keeps his place at 13 for consistency in the midfield. In the back 3, Elliot Daly has not had the best of games defensively at 15, but is bringing so much with his attacking lines and deserves a chance to grow into the role. Jonny May has been one of the better players over the last 2 matches and has been involved in so many of the team’s best moments so keeps his place at 14. I’ve been critical of Mike Brown on a number of occasions in recent years but I thought he had a good game in this match, though I still worry about him if he is forced to defend normally against a specialist winger rather than coming across to make cover tackles as in this game. I would rest him for the final game and give the 11 shirt to Jason Woodward. Admittedly I am perhaps biased as a Gloucester fan, but this is a guy who has started for the Hurricanes ahead of Julian Savea in a Super Rugby final and his ability to play both on the wing and at fullback allows him to help Elliot Daly similar to how Mike Brown did at the weekend.

To say watching Argentina over the last couple of weeks has been disappointing is possibly the understatement of the century. They have been awful! Wales rested a number of players on this tour and have been chopping and changing the lineups to make sure everyone gets decent gametime, so their performances have not necessarily been great, but they still never looked like losing in either match against the Pumas.

A couple of years ago I would have had Nicolas Sanchez as one of the best fly halves in the world, but he has been dreadful over the last 2 weeks. The team have not done well enough at the breakdown,the forwards have not been able to control the set piece in the way they used to and the backs looked shorn of the flair we have got used to seeing over recent years. Taking off Pablo Matera and Agustin Creevy – often 2 of their best players – so early in the second half felt like the coaches were throwing in the towel for this match. In fact head coach Daniel Hourcade did throw in the towel, announcing that he will step down after next week’s game against Scotland.

Hopefully new leadership will start the turnaround in fortunes, but the team needs more than that. As it stands, only players inside Argentina are selected for the national team, which means that the entire squad are from the Jaguares team – even though it has looked as if the guys had never played together before the last couple of weeks! While the familiarity should help the team, it cannot be easy to jump from Super Rugby to international rugby. There were rumours a few months ago that overseas-based players will be available for selection again soon, this needs to happen immediately so that stars like Facundo Isa can help this team get back to the level they were at.

Massive congratulations to the USA who ran out 30-29 victors against Scotland last night to win their first match against Tier 1 opposition. Though it was by no means Scotland’s strongest squad, there was still enough experience to go with the talented youngsters to think the Scots would win and while they did miss a couple of kicks at goal and have a try disallowed for a knock-on by Mark Bennett, the USA were good value for their historic win to continue their unbeaten 2018.

Just over 2 years ago, I wrote about how PRO Rugby could be the next stage of a revolution that could see the USA become the next rugby superpower. While PRO Rugby may not have worked out as hoped, things seem to be going better with its replacement Major League Rugby (MLR). The majority of the squad are based in the MLR, with a handful of overseas-based players like Samu Manoa (Toulon), AJ MacGinty (Sale), Joe Taufete’e (Worcester) and Blaine Scully (Cardiff Blues) supplying a high level of top-quality experience despite the recent retirements of Todd Clever and Chris Wyles. The expansion of MLR (Ben Foden is rumoured to be joining expansion team Rugby United New York) will continue to help the development of the local players, while other players like Danny Barrett will continue to gain experience as part of a successful team on the World Sevens Series. And all the while the success of the national team (They have won the last 2 Americas Rugby Championships) and the MLR will draw in new talent, like centre Paul Lasike, who played fullback in the NFL for the Cardinals and Bears.

Qualification for the 2019 World Cup saw the USA qualify as Americas 1 for the first time. If their rise continues, it is possible they may soon start to qualify for the finals by finishing top 3 in their pool. 2019 may be too soon for that, but 2023 is certainly a possibility. In fact, if the USA’s love of rugby can continue to grow, then they could be the next team to break into the top tier. I’ll keep my fingers crossed.

Tim Etheridge Big fan of sports, Star Wars and the Schmoedown. Follow Eyes on the Ball for sports and Schmoedown thoughts and The Canon Padawan for Star Wars talk
Published June 17, 2018