Hi guys, apologies yet again for the delay in writing this, the last few weeks have been so busy I’m in serious catch-up mode. Thanks everyone for your patience!

After Jason Inman defeated Mark Donica in their Innergeekdom Title Match back in April, the defending champion spoke about how he wanted his next title defence to be a worthy competitor who had got there by defeating some of the best competitors in the division. It looked like he may get his wish as it was announced that there would be 5 1v1 matches leading to a Fatal Fiveway Number 1 Contender Match for the chance to face him.

And then Kalinowski got involved.

“The Killer”, fresh from his split with The League, approached Commissioner Thadd Williams and through questionable methods arranged a new format for the next run for a title shot: a tournament containing 16 competitors.

If you want to read my reviews of the previous rounds, they can be found here:

And so it came to this: the showpiece event that I doubt many people were expecting when the Round 1 matches were initially announced. Mike Kalinowski, the puppet master and creator of the tournament against Mara Knopic, who was not even in the original 10 Innergeekom competitors slated to compete for Jason Inman’s title.

Mara was clearly still suffering in the aftermath of her accident, but the Chewbacca onesie seemed to give her strength and she matched her highest Round 1 score of 8/10, running out of time trying to answer the Green Lantern quote and just getting the incorrect age on the Patreon Question. It was the Patreon Question that denied Kalinowski another perfect round and if I’m honest, I would have probably accepted Mike’s answer of a minimum age limit, though the answer required was the specific age.

Going into Round 2, The Killer deferred his spin and Mara got Harry Potter on her first spin, choosing to keep it. She started strong with 4 points from the first 2 questions, before checking down to multiple choice to get a point on the next one, but missed 2-point attempts on both of her remaining questions, Kalinowski unable to steal. Kalinowski was up next and it looked like it would be his day as he landed on Spinner’s Choice on his first spin and chose to go with the DCEU. Though he missed his second question, Mara was unable to steal and he answered his other 4 questions correctly for 7 points, extending his lead to 16-13.

Both players chose to play it safe in Round 3 when Kalinowski spun Star Trek but Mike was perhaps a little too safe, only going for 1 point whereas Mara went for 2. Both gave the same correct answer and Mike’s lead was cut to 2.

His lead soon grew though as he dominated the speed round, buzzing in first on all 5 questions, however a wrong answer on the 2nd question meant that he only came away with 3 points from the round. In my preview of the final, I noted that the buzzer round was new for both competitors, but it appeared that Kalinowski had studied the round better, having his hand already on the buzzer whereas Mara had her hand off to the side, giving her a distinct disadvantage.

And so we came to the final round. With the scores at 25-20 in favour of Kalinowski, it would require an Innergeekdom-record comeback in order to win (Navarro’s 4 point comeback against Jeremy Jahns the highest up to this point). She got off to a great start by nailing her 2-point and 3-point questions to throw things over to her rival. Kalinowski missed on his 2-pointer in Scores and Soundtracks but correctly answered his 3-pointer to force Mara to answer her 5-pointer to stay in the game. The category: Indiana Jones. Mara has been coming out to the Indiana Jones theme all tournament and proved she knew her stuff in the category by answering the question with barely any hesitation. And so we were back to Kalinowski, 5 points in the category of MCU. He is generally strong in the comic book movie categories, but I would feel confident in calling this question the hardest ever asked in Innergeekdom! Despite still having all 3 of his JTE rules, Kalinowski could not pull the answer and Mary Shelley’s Frankenstein remained as she wrote it, with him falling trying to defeat his own creation. Mara Knopic, the rookie who nobody had heard of mere months ago, had won the Innergeekdom tournament and booked her place at the September Live Event to face Jason Inman for the title!

Kalinowski can certainly hold his head high after that performance as both Mara and Rachel Cushing admitted post-match that they didn’t know the final answer either, while he has consistently scored high in all 4 matches within the tournament and does not appear to have any glaring weaknesses. I just wonder how much he regrets playing it safe in Round 3 and not using one of his JTE rules on his 2-point question in Round 5 as he appeared to know the answer but not be able to pull the name.

What chance does Mara Knopic have against Jason Inman? I think she has every chance of winning! She may not have a perfect Round 1 to her name (things have been far from perfect in some matches) but she has shown a wide range of knowledge and has continually found a way to win regardless of who she has playing, going so far as to beat 2 of what I would consider to be the top 3 Innergeekdom competitors in consecutive matches. She will also benefit from the final being in a title format as she can now see what she needs to work on ahead of the final. If she can learn from this match to keep her hand already on the buzzer, she has every chance of getting some points in the speed round (where Inman excelled against Donica) and if she can keep things close, she will have every chance of winning the title.

The fun bit will be seeing how Dan Murrell reacts. The 2-time former Singles Champion will be at the event as he is competing along with Rocha in the Anarchy match against Stacy Howard and Winston Marshall and would have also been expected to cheer on his fellow Horseman in his title match. However now that Mara is there Murrell’s loyalties may be split and Rocha even suggested on Wednesday’s Collider Live that he may be cheering her on for the match. What impact could that have on the Horsemen in Inman were to lose? This could be a tough test of Rocha’s management over the next few weeks!

Looking beyond Ineergeekdom for a moment and Mara has to come into contention for Rookie of the Year. She is 4-0 this year with some impressive scalps to her name and is set for a title match. Ethan Erwin would currently get my vote due to the combination of Singles (where he lost his Number 1 Contender match to Andreyko to go 3-1) and the Free 4 All, while he also has a chance to improve his standing with a good performance in the Anarchy tournament. Jeannine would be the other name coming into contention, but with a 2-1 record and being on the same team as Erwin, I would give him the advantage. However, if Mara can become the first rookie to win a title, then surely the odds of winning the award will swing her way.

Thank you @MikeKalinowski for the #Schmoedown #Innergeekdom tournament. Established stars who had poor records in t… twitter.com/i/web/status/1…

“This is what this tournament was about” – Mike Kalinowski

Since Mike parted ways with The League and started KOrruption, it’s safe to say he has had an impact on the league. The Innergeekdom Division has gone to a new level with the number and quality of the 1v1 matches and the tournament, while competitors like him and Rachel now have records more befitting their quality, while other unknowns (like Mara) have had a chance to come into the league and make a name for themselves.

As well as this tournament, KOrruption has seen The Patriots and the Lion’s Den come to an end, the formation of the Knights of Ken – who appear willing to throw their support behind Kalinowski – and has also led to the (at least temporary) breaking up of most teams for the Anarchy edition of the Ultimate Schmoedown Team Tournament, which is at this stage impossible to call. As he said post-match, KOrruption is not just Innergeekdom and this is just the start… I can’t wait to see what’s next!

What did you think of the final? Who do you think will win at the El Portal Theatre? Would Mara get your vote for Rookie of the Year? Let me know down below. Thanks for reading and until next time… Baaaaa! 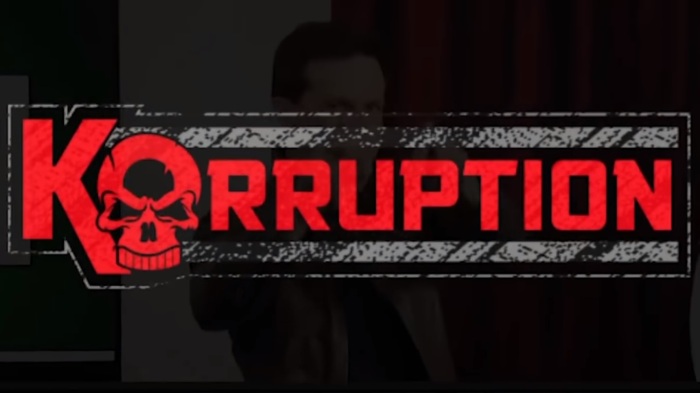