Let me start this by being very clear, I am a fan of Rocha, Top 10 and The Horsemen. When I first started watching the Schmoedown just before the first Collision, I found myself rooting for Rocha and Knost following Bibbiani and Burnett’s betrayal and have kept my support with them ever since. So I pains me to write this… but I since they joined the league, I have also come to love Team Action.

WARNING – this will contain spoilers for Rocha v Ghai

Since joining the Schmoedown in March 2017 with a TKO victory over the Nightsisters, Ben “The Boss” Bateman and “Dastardly” Drew Ghai have been leaving their mark on the league. Originally acting like a pair of jerks in their early matches (except when their mothers were in attendance), they began to shine in the 2017 Ultimate Schmoedown Team Tournament, with their antics seriously getting under their opponent’s skin – none more so than against Team Trek and Top 10 – on the way to the final where they lost to super-team Above The Line. Continuing to give disrespect, they faced Top 10 in a rematch at Spectacular 2 with a title shot on the line. The veterans came in strong and defeated their young rivals and then… things went crazy!

Andrew Ghai, in a fit of madness maybe caused by having his hair ruffled earlier by Dale The Dude, tackled John Rocha and found himself quickly suspended for 3 months. Would a spell away from the league calm these 2 own? No chance!

Ben Bateman took it as an opportunity to further his career in the Singles League, following up a loss in the Fatal Fiveway Qualifier for the last Ultimate Schmoedown spot with a TKO victory over Dale The Dude while really growing the persona of “The Boss”. He has continued this since Ghai’s return by beating Scott Mantz – resulting in having his face on the Movie Release Dates wheel slice – in between losses to Andreyko and Rocha – each of whom were on runs to title matches.

It is with Ghai though that we see the real fun. He returned to the league with a shock appearance at Free 4 All II, taking the place meant for the retired Dan Murrell, who he had apparently killed. Following this, we had a couple of months of him strutting around telling everyone who would listen (and everyone who wouldn’t) how he was the Ghai that beat the GOAT, until he took his antics one step too far and drew Murrell out of retirement to join the new-look Horsemen at the 2nd live event.

Murrell immediately challenged him to a match at Collision 2 and everybody was (eagerly in many cases) waiting for the former champion to teach the young upstart a lesson. Well THAT didn’t go to plan at all! Ghai TKO’d Murrell in possibly the biggest shock in Schmoedown history, and followed it up with another TKO over another former champion in Mark “Yodi” Reilly on his return to the league to set up a Number 1 Contender match against his biggest enemy, John Rocha. Unfortunately for Ghai and the Action Army, 3 former champions in a row was one step too far and he fell to The Outlaw, but had done enough to earn his respect and a handshake.

Much in the way that Rocha took the Schmoedown to a new level in Season 3 with his persona of “The Outlaw”, Ben and Drew have raised the bar in what it means to be a heel an the personas of “The Boss” and “Dastardly” are 2 of the best in the league. There probably isn’t anyone else in the league whose persona is so far away from their real-life personalities. Both individually and as a team, these guys are box office and I always find myself wondering what they’ll be getting up to next. Will they steal another pet? Tackle someone else? Actually say Jenn rather than Jessica? 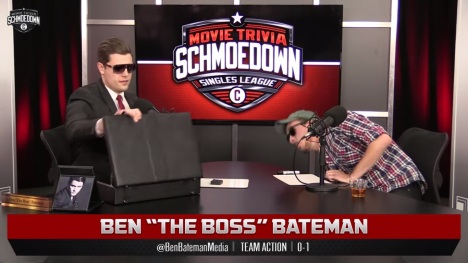 The important thing, though, is that they can back up the heel attitudes with the performances. From watching their matches and their Schmoedown chats on their Patreon, they have good knowledge of movies but are some of the best players of the game itself. They strategise how to beat someone – look at Ghai not giving Murrell Sports Movies as he had likely studied this after getting it in his loss to Harloff – while also knowing when it is worth using a JTE rule and (especially Bateman) using all of the allotted time to answer the question and ensure they are getting it right. They have also proved to have strengths in categories many competitors would prefer to shy away from like Oscars, Comedies and Movie Release Dates.

Records of 2-3 (Bateman) and 2-1 (Ghai) may not seem amazing for the way I’ve hyped them up, but I can’t think of anyone who has had a tougher opening 3 matches than Ghai’s 3 former champions, while 2nd place in a Fatal Fiveway and losses to 2 competitors on their way to title shots is nothing for Bateman to be disappointed about! Even as a team, their 4 losses have come to Nerd’s Watch (who reached a Number 1 Contender match) and Top 10 and Above the Line, who have both held the Team Belts – these guys don’t lose to just anybody!

This strength allows them to have such an impact on storylines as it means they can appear regularly by continuing to win, while their heel personas would not work anywhere near as well if they were losing every time. They have been involved in some of the best storyline moments of the season: their win over DC Movie News pushed Mike Kalinowski over the edge and seeing him leave The League and establish KOrruption, they brought back fan favourites Reilly and Murrell (that ending to the second live event is still my moment of the year) and gave the Horsemen their first rivalry as they look to establish themselves in the league.

But what next for these 2? Bateman is teamed with Reilly in the Anarchy Tournament and I wouldn’t be shocked to see them go the distance and challenge the Shirewolves at Spectacular 3. I doubt Bateman’s record will see him in the 8 people contesting the Ultimate Schmoedown Singles Tournament, but the quality of opposition Ghai has faced could see him just make the cut. Away from the matches themselves, Ghai refusing to work with Jay Washington could potentially see Team Action’s next rivalry be with the Viper Squad and while I don’t expect to see them becoming Horsemen (a faction would probably shackle them) there does appear to be a growing respect between them and they may find themselves as uneasy allies from time to time *braces for the outcry from Action Army and Outlaw Nation*

Where’s the belt? Potentially not that far away!

Tim Etheridge Big fan of sports, Star Wars and the Schmoedown. Follow Eyes on the Ball for sports and Schmoedown thoughts and The Canon Padawan for Star Wars talk
Published September 27, 2018September 28, 2018