The 2018 Ultimate Schmoedown is underway and as its name suggested, the Team tournament has been anarchy. For those of you who have missed a big chunk of this season (you’re missing out and really need to go back and watch what you missed), all teams were disbanded and picked from a hat, leading to 16 new teams– well technically 15 new and the Wildberries – and a number of new managers. Following the Shirewolves’ victory to earn the Team Title and a few other issues with the original selections, the 16 teams were confirmed along with the bracket and the tournament kicked off at the 3rd live event.

Rather than try to do a write-up for each match as I did for the Innergeekdom Tournament, as many of these teams may not have much of a future I have decided instead to give my overall thoughts from the round instead.

The semifinal results were:

It may come as no surprise, but the way a team works together and its chemistry is so important in this tournament. On the whole, I think all 4 of these semifinalists have done a great job of working together.

Lon and Jonathan were always going to work well together being brothers, and I think that this has gone a long way to helping Jonathan quickly bed into the competition after an unexpected entrance following JTE’s injury. Chance may be new to the league but by being paired with Kalinowski, he is with someone who is so experienced in the Schmoedown and with plenty of experience in the division. Sneider is the most experienced (and most successful) in the teams division of all these competitors and has done a great job of adapting from working with JTE to Andreyko, while Reilly and Bateman are so invested in the league. Being a big fan of the Horsemen but also Team Action, I have listened to a couple of podcasts where Ben and Mark have discussed their team-up and talked tactics and it has been great to see how Reilly has actually modified his game off the back of these tactical discussions. 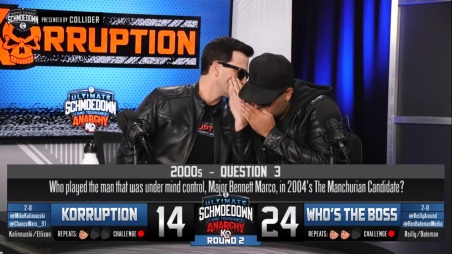 When you watch the most successful teams in Round 2 or on the 5-point question in the final round, it is so rare to see a competitor just blurt out an answer these days. Even when one of the competitors clearly knows the answer straight away, you will generally see them take a moment to discuss it with their teammate just to make sure they are definitely correct. With so much talent now in the league, playing as 2 individuals will not get you a win deep in a tournament and it will be important to work together as a team in order to reach the top and win the belt.

One of my favourite things about this season has been the number of new faces appearing at the announcers desk. While variations of Kristian, Ellis and Ken (with occasional cameos from Campea, Reilly and Macuga) was great, having Jenn Sterger and other competitors like Bibbiani, Rachel Cushing, Jason Inman, Jay Washignton, Sneider or – in the case of this week’s matches – Jonny Loquasto and Marc Andreyko has not just allowed us to see some more of our favourite competitors, but also allowed us to get more of a variety of styles at the desk. Jonny was a great announcer and you could tell he was experienced in this sort of role, while Marc did a great job of bringing his wit and humour to what was already going to be a wonderful match.

As Season 5 draws to a climax and moving into Season 6, I hope we continue to get competitors appearing at the desk. With Ken and Alex set to battle it out for the Star Wars Title at Schmoedown Spectacular, I would love it if their rival from the last Number 1 Contender match Joseph Scrimshaw were to appear at the desk for their match and I would love an Innergeekdom competitor – Rachel, Jay and Emma all have experience at the desk – to announce Mara Knopic’s title defence against Kalinowski.

Not to be forgotten

“Shut your mouth and spin the Wheel” – Mike Kalinowski

This has arguably been the best season of the Schmoedown so this is a tough call to make, but I honestly think the match between Who’s The Boss and KOrruption could be my favourite match of the year so far!

Even taking away the cutscenes at the beginning and end due to not all matches having these, the goings-on throughout this match were just wonderful. From Finstock captaining ships and looking for icebergs in the Caribbean (not a sentence I thought I’d be writing anytime soon) to Bateman and Reilly calling Kalinwoski “a loser” and a “little ninny bitch” respectively while Kalinowski called himself “the boss”, these were some of the most amazing promos we’ve had this season. A cameo from Kal during Who’s The Boss’ entrance, Ben and Reilly refusing to shake Mike’s hand pre-match, Ken and Napzok staring each other down after Round 1, the shit-talk from everyone throughout, Reilly’s celebration throwback to when he won his title back from Rocha (a match I watched mere days before as I try to catch up on all the Schmoedown I missed before getting into the league), Ben getting drunk on winners’ juice post-match and calling Kal’s balls “winners”… this match had everything!

Round 2 may have stopped this match from being as close as many of us would have hoped, but I still found myself completely enthralled throughout and think this has just beat out Team Action v DC Movie News as my favourite match from the Team Division this season, which is itself saying something considering we had 2 title matches between Above The Line and The Patriots!

Coming to a climax

Cutscenes were back this week with a vengeance and boy were they exciting!

We start off with Finstock finding proof that Bateman really was innocent of stealing Kal and was set up by Kalinowski. Finstock has done a great job of getting Reilly and Bateman working together and if Who’s The Boss win the tournament and then defeat the Shirewolves at Spectacular, I think he could come into consideration for Manager of the Year.

Following The Harris Brothers’ win, Kalinowski paid Thadd a visit and set up Ken Napzok as the contender to face Alex Damon at Spectacular for the Star Wars belt. I’m looking forward to seeing this match (though I still think it is a shame that Sam Witwer has not been available this year, the man has to work and I think the league has done a good job working around this to the best of their ability) and it will be interesting to see how Ken acts considering this will be his first match since he left the Lion’s Den.

It turns out Brianne was outside the room eavesdropping and this was enough for Miss Movies who soon paid Thadd a visit with a list of competitors who will walk unless Thadd either resigns as Commissioner or tells Mike no. Following KOrruption’s loss, Kalinowski came in to arrange Spectacular’s Team Title match as a Triple Threat: the anarchy winners v The Shirewolves v Korruption, however Thadd found his backbone and said no. Kalinowski didn’t stay to argue, but it certainly looks like he isn’t done.

While the Commissioner storyline has not gone anything like what I once predicted, I am absolutely loving the way the KOrruption storyline has tied into this and I can’t wait to see how this continues. Kristian recently confirmed there will be 6 matches at Spectacular and we currently have 4 Title Matches and a Number 1 Contender Match for the Singles Division confirmed, which leaves just 1 match. I was initially thinking this would be another Manager Bowl, but now I am starting to think that this is going to tie into these storylines.

Predicting the final: Who’s The Boss v The Harris Brothers

This is such a hard one to call as I have twice predicted against The Harris Brother and been proved wrong, but I think I’m going to have to do it again. Reilly and Bateman are in great form both individually and as a team and both clearly want to get their hands on the belt. It’s just so hard to predict as we still have so little knowledge of Jonathan’s strengths and weaknesses (which could be an issue for Who’s The Boss should The Harris Brothers spin Opponent’s Choice in Round 2), but when I look at Ben & Reilly I struggle to find many categories I think they would really struggle with. 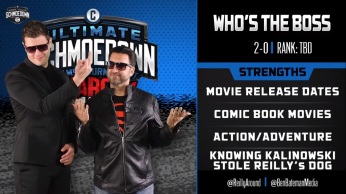 I would also assume that in line with other tournament finals, this will be a 5-round match. Reilly is the only one here with any experience of the longer format and as I have shown previously, experience does often appear to help in these matches. I’m pretty certain he and Dagnino – who has also competed in the initial Team Title Match against Team Schmoes and managed the Patriots for 8 5-round matches – will have taken some time to talk tactics with Bateman to give them every advantage in the final.

And finally… an exciting announcement

It’s with great pleasure and honour that I can announce that I will be one of the writers for the Schmoedown’s official website!

Though I will be writing on the website, this does not mean my Schmoedown posts on here are coming to an end as there may be some things not quite right for the site that I still want to write about, it may just be that the posts on here are a little less often and I may not be following tournaments round by round as I have with Anarchy and the Innergeekdom Tournament.

There was a time last year when I wanted to start writing about the Schmoedown because I was enjoying it so much and had nobody in my day-to-day life to discuss it with, but wasn’t sure it was right for the blog. Eventually I took the chance and now my Schmoedown posts are some of my favourite to write, so thank you very much to everyone who has not only read these but also interacted with me and given me feedback this year!