The Tour de France was over for another year and while the change from Team Sky to Team INEOS did not stop them winning the race, the line of British riders came to an end as Egan Bernal became the first Colombian to win the Tour. In a race where some of the big names of cycling – such as Chris Froome, Mark Cavendish and Tom Dumoulin – were missing, the race was wide open for many.

Before we start looking ahead to the Vuelta a España, I wanted to bring an end to this year’s Tour to look at some riders who enhanced their reputations and also a few who disappointed by not reaching the levels expected. 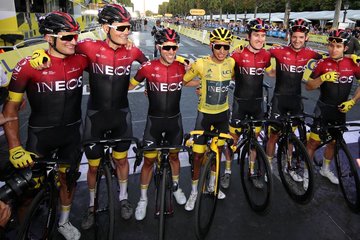 Egan Bernal: The Colombian rode his first Grand Tour at the 2018 Tour de France as a key super-domestique for Geraint Thomas and Chris Froome, finishing 15thin the General Classification. Given the joint-leadership of INEOS alongside Thomas this year, he proved to be one of the strongest in the Alps and took the yellow jersey on Stag 19’s climb of the Col d l’Iseran. With Bernal, Thomas, Froome and (according to rumours) 2019 Giro d’Italia champion Richard Carapaz on INEOS’ books next year they are not short for quality, but as the youngest Tour de France winner since 1909, Bernal looks to be a star of the next 10 years.

Julian Alaphilippe: Bernal may have won the race, but Alaphilippe was the star of this year’s Tour and I’m so glad he was recognised with the Combativity award. Last year’s King of the Mountains was always going to be a danger for stage victories, which would give him a chance of wearing the yellow jersey, but he ended up holding the race lead for 14 stages. Rather than just defending the lead, he continued to attack, bringing life to Stage 10 when he used the crosswinds to attack the peloton. Even when people started to say that he was in the stages where he would start to lose time, he won the Individual Time Trial and then put time into most of his rivals on the Col du Tourmalet.

He was already the number 1 rider in the world, but in terms of Grand Tours, this race took him from a dangerous rider to a genuine GC contender.

Thibaut Pinot: Stage 10 aside (where poor positioning in the peloton as Alaphilippe attacked caused him to lose time to his GC rivals), Thibaut Pinot was one of the strongest GC competitors this year and looked so dangerous on the climbs, including his win on the Col du Tourmalet. Alongside Alaphilippe, Pinot put pride back into French cycling and would likely have challenged for the race victory over the final stages if he hadn’t been forced to abandon the race with a torn muscle in his thigh.

Caleb Ewan: Moving from the GC contenders to the sprinters, Caleb Ewan may not have been able to win the green jersey, but he was arguably the star of the sprints, with his 3 stage wins the most of any rider this year, including on the Champs-Élysées. Beyond that, though, it was the manner of his victories as he often found his success with a late surge to the first place, while his first win came after he lost his lead-out man Jasper De Buyst when he came off the road trying to bring Ewan to the front of the peloton. We seem to be seeing a changing of the guard with the sprinters, and Ewan looks like he will be at the forefront of it.

Dylan van Baarle: You have to be a high-quality rider to be representing Team INEOS at a Grand Tour, but van Baarle outdid himself this year. With some of their key mountain domestiques struggling in the final week, van Baarle took on an unfamiliar role in being one of the main men leading Thomas and Bernal up the climbs, while his 46th place on GC was by far his best finish in a Grand Tour. Without van Baarle picking up the slack in the mountains, Sky probably wouldn’t be celebrating filling the first 2 stops on the podium.

Adam Yates: winner of the Young rider classification in the 2016 Tour, where he finished 4th overall, so much has become expected of Adam Yates, especially considering how well he and brother Simon have improved their performances in Time Trials. Nominated as the Mitchelton–Scott team leader, Yates found himself dropping away from the leaders far too often and was so far behin in the GC, it allowed his brother Simon to switch priorities from supporting him to hunting stage wins just halfway through the race.

Romain Bardet: Another who found himself dropping away from the leaders far too easy in the stages, Bardet has long been the man the French have been pinning their hopes on but was invisible for much of the race. He was so far off the pace, he was allowed to get away in a couple of late breakaways to win the King of the Mountains classification, the only silver lining for a poor race.

Nairo Quintana: Is Quintana the most disappointing GC rider of recent years? This year’s race saw the Colombian drop so far out of contention that he was allowed to get away in breaks, but then had one super strong day on Stage 18 where he broke the record for the quickest climb of the Col du Galibier, which put him back in GC contention, eventually finishing 8th.

André Greipel: As I mentioned when praising Caleb Ewan, we are seeing a changing of the guard in the Points classification as the young sprinters are taking over from the older racers. At 37 years old, it looks like Greipel’s time competing for Grand Tour stage victories may be over as he only managed to finish in the top 10 of a stage once – 6th on the Champs-Élysées.

Doug Ryder: Finishing off with team owner rather than a rider. Despite having 30 stage victories to his name, Dimension Data chose to not include Mark Cavendish in their line-up for the Tour. The team were initially planning to include him but were overruled by Ryder despite Cavendish appearing to fit the team’s strategy better. Though he has struggled with illness in recent years, his replacement Giacomo Nizzolo managed one 4th and two 7th-place finishes, while Edvald Boasson Hagen finished 5th on the Champs-Élysées… not really the success they would have been hoping for.

Tim Etheridge Big fan of sports, Star Wars and the Schmoedown. Follow Eyes on the Ball for sports and Schmoedown thoughts and The Canon Padawan for Star Wars talk
Published August 3, 2019August 3, 2019