As we reach the 3rd round of World Cup matches, we have been blessed with plenty of fantastic rugby, even if the heat and humidity has led to a high number of handling errors. However, all that rugby was overshadowed in the news for the best part of a week, focusing on just a couple of seconds on the pitch.

The second match of the tournament saw Australia take on Fiji in a match that I thought had the potential to be the big upset of the tournament. It certainly looked like it could go that way, as Fiji started strong and had control for much of the first half. With 25 minutes on the clock and the score at 7-11 to Fiji, the islanders released Peceli Yato – who to this point had been the best player on the pitch – down the 5m channel following a lineout. The back row made good ground, before eventually being felled by a combination of Nic White and Reece Hodge. While White’s tackle was fine, Hodge’s didn’t look right on first viewing and it looked even worse as the broadcasters replayed it. There was little (to none) attempt to wrap an arm and there was clearly contact with Yato’s head – so much so that Yato was forced off the field for a HIA, which he failed!

Now let’s take a moment here to remind ourselves of the new high tackle framework that was brought in at the end of last season: 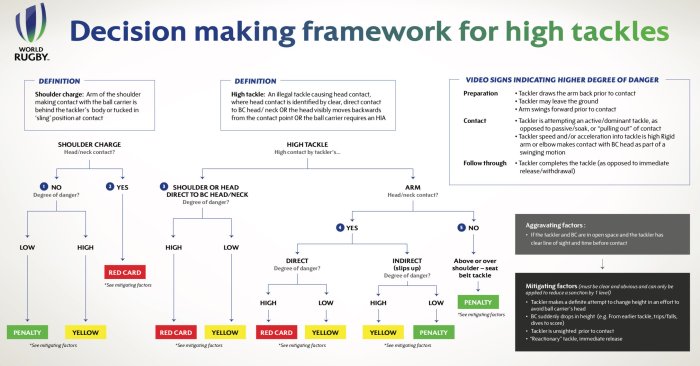 Apply that to the Hodge tackle. Is there foul play? Yes. Is it a shoulder charge or high tackle? The framework describes a shoulder charge as the tackling arm being behind the body or in a sling position, so while there is no real attempt to wrap – High Tackle. Shoulder/arm? Shoulder. Direct to the head/neck? Yes. Degree of danger? Hodge is attempting a dominant tackle – High. Before looking for mitigating factors, are there any aggravating factors? Hodge has a clear line of sight in open space – Yes. As there are aggravating factors, mitigating factors do not come into consideration. Result: RED CARD

So what happened in the match? Well apparently nothing. Play appeared to continue without referee Ben O’Keeffe referring the challenge to TMO Rowan Kitt – O’Keeffe would have been largely unsighted as he was behind Yato – or Kitt intervening in the game. So Fiji lost one of their stars and Australia, who should have played over half the game a man down, kept 15 men on the field. Even more galling, Hodge went on to contribute 8 points in a 39-21 victory. It was later revealed that the challenge was referred to the TMO, but Kitt felt that it was acceptable. Given that the referral wasn’t clear to TV viewers, it must have been the most cursory look from Kitt and I struggle to see how he could have not felt that this deserved even a penalty according to the framework if he was doing his job properly.

Unsurprisingly, Hodge was cited following the match and ended up with a 3-week ban (cut down from 6 weeks). 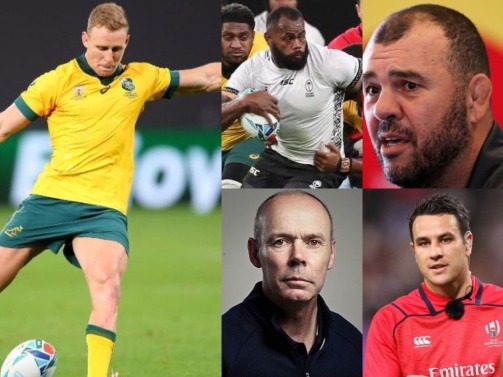 While this could have been everything and the end of a poor moment from the TMO, the story only continues as reactions came in to the citing and ban. Michael Cheika blasted the Fijian coaches for being nice to his face and going behind his back to report the tackle to the citing commissioners. This is such a pathetic argument as the coaches have no responsibility to tell Cheika they are referring the incident, while it is hard to imagine the citing commissioner would not have chosen to review the incident anyway. Cheika also refused to accept that the challenge was a red card – even when saying they will not appeal the ban. The framework clearly proves that it was a red card, but as Cheika said following a penalty against Samu Kerevi in Australia’s match against Wales “I honestly don’t know the rules anymore.” – Pretty embarrassing for the head coach of a Tier 1 international team.

Things only got worse as the report form the tribunal made note that Hodge was unaware of the high tackle framework. As I said to some of my friends who were keeping up with the tournament, if a fan like me can have a copy of the framework saved to their phone (yes, I need a life) then there is no excuse for a professional playing for a Tier 1 nation to not know the framework. I would have also thought that given the number of players who were given red cards during the World Rugby U20 Championship, teams would have made sure their players were aware of the framework. Poor from the player, poor from the coaches. But even without knowing the framework, a tackle that involves contact with a ball carrier’s head has not been legal for years… there was no excuse to tackle that high.

@CliveWoodward @ITVRugby You're right, there were huge implications for the tournament: Fiji lost their best player… twitter.com/i/web/status/1…

Sadly, it wasn’t just Michael Cheika questioning the merits of a red card. Commentating on the match, Ben Kay chose to praise Hodge for putting in a hit rather than comment on the illegality of it. Clive Woodward went even further following the ban to tweet that it was a yellow card at most. If even the officials, pundits and commentators can’t stick to World Rugby’s frameworks when looking at an incident, what hope has the general public got of understanding what is legal? With player safety such a big issue, things need to improve.

Sadly in this case, Yato’s failed HIA meant that he was unavailable for Fiji’s loss to Uruguay that has effectively ended their chances of making the quarterfinals. Reece Hodge will miss Australia’s remaining pool games but return for the knockouts. Looking at everyone involved in this affair, it’s hard to argue that anyone comes out a winner.

Tim Etheridge Big fan of sports, Star Wars and the Schmoedown. Follow Eyes on the Ball for sports and Schmoedown thoughts and The Canon Padawan for Star Wars talk
Published October 3, 2019