7 of the Best Schmoedown Matches

In the build-up to the Atlanta live event, I wrote about how the Singles Championship Match between Ben “The Boss” Bateman and “Dangerous” Dan Murrell had the potential to be the greatest match in the history of the league. Looking back, it certainly didn’t disappoint, as Ben Bateman came from behind to take a 5 point lead, only for the game to go to overtime, where Murrell won. While it doesn’t quite get my vote for the greatest match of all time, it is certainly up there on the list, and that got me thinking: What would I pick as the greatest matches of all time?

This is obviously my own personal list, so I would love to hear your picks. I will also not be including any Free 4 Alls as it would be unfair to compare a 4-hour event to a single match. I’ve also chosen not to rank these movies as I think my list would constantly change as I re-watched some of these matches. So in honour of this being the Schmoedown’s 7ᵗʰ season, I give you my top 7 matches in the history of the league.

The live crowd was on fire for this match with the Action Army there in force to cheer (or boo) for Ben Bateman, while the thrill of seeing the GOAT going for his 4ᵗʰ Singles Title had people hyped. Add to that all the build-up with the controversy over who would manage each of the competitors and this match had all the build-up it needed. From the promos from Tom Dagnino and John Rocha (so much for a gentleman’s agreement of no promos), to Dan’s early snark (“Sir John Woo”) and this was already building nicely. Bateman came into Round 2 with a 3-point deficit but pulled a point back, before Rounds 3 and 4 swung the scoreline heavily in his favour, and the crowd were vibing off his reactions. Then for this to go to overtime and we were in for a treat, ended with the GOAT keeping his 100% record in live events and taking the title back.

My vote for the greatest match of all time would be the inaugural Schmoedown Throwdown that saw Rachel “The Crusher” Cushing challenge Mike “The Killer” Kalinowski for the Innergeekdom Title. They had faced each other much earlier in their careers (Rachel getting the win), while Rachel had also beaten Mike in a Triple Threat in the Singles Division. This was the first time that they had faced off since Mike had turned heel, however, so the battle for the belt between the top 2 in the division also being a battle of good vs evil set this on a great stage. Down 15-23 after 2 rounds, it looked over for Kalinowski, but the betting round and speed round saw an incredible swing to 20-20, one of the most incredible comebacks I have ever seen! After both went perfect in Round 5, it went to Sudden Death and the title was decided by just a vowel as Rachel Cushing won the Innergeekdom Title she had been dreaming of to become double-belted. 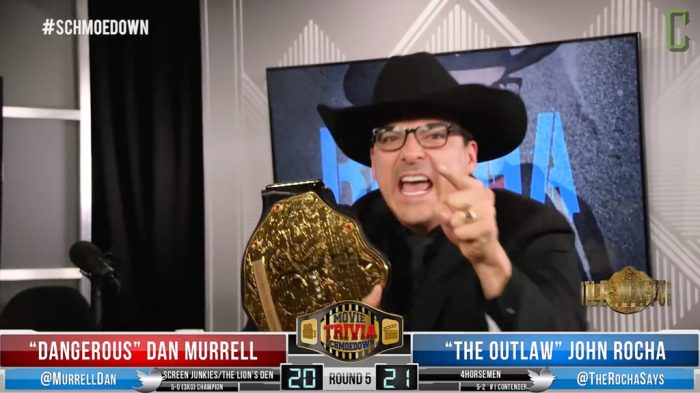 Season 4 was the year that the show really started to become what we know today, but its Championship Matches often seem forgotten when we look back. Back in the early days of the league, there were 3 superstars: Mark “Yodi” Reilly, “Dangerous” Dan Murrell and “The Outlaw” John Rocha. Defending Champion Dan Murrell came into this match with a 5-0 record but Rocha, the original heel, was gunning for the belt. The pair could not be separated in Round 1 and while Murrell managed to open a 1-point lead during the wheel round, Rocha had brought things back level going into the final round. It ended with Murrell needing to hit his 5-pointer, which he missed, and as it was announced that Rocha (who had himself not known the answer so didn’t realise that he had won) had won, the Outlaw let out a scream of joy that I still consider one of the most iconic moments in the history of the league. 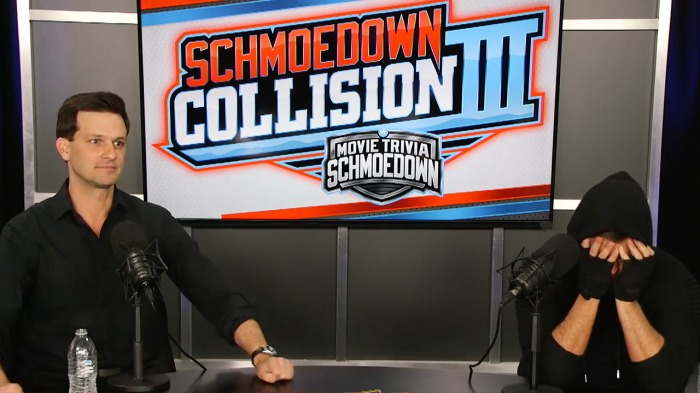 Kevin “The Smasher” Smets was on a roll, one of the most impressive rookies that we had ever seen, winning his first 3 matches without having to answer a question in the final round. Then at Collision, he met his match in Mike Kalinowski. Their feud had already been growing through the season and this #1 Contender Match was finally the chance to get to see them go head-to-head. Things were all level after 2 rounds. Both hit their 2- and 3-pointers and Sudden Death was looking a distinct possibility… until “Don’t tell Peter”. Saying “Peter” instead of “Harry” was a killer for Smets and Kalinowski correctly answered his 5-pointer to set up a rematch with Rachel Cushing, being overcome with emotion as his faction congratulated him.

Who would have expected that the match in the Star Wars Division would be remembered as the match from Spectacular II despite Andrew Ghai tackling John Rocha after Team Action v Top 10?! But this match had everything. Ken’s recent betrayal of Rachel Cushing and defection to the Lion’s Den set him up as the ultimate villain to face Sam Witwer- who would’ve thought we’d be cheering for Darth Maul! And then to the match itself, and the Iron Man format made it truly a test of knowledge v knowledge. Both of them continued to wow Mark Ellis (and probably quite a few viewers) with their insane knowledge of Star Wars, but as time war on, quotes proved to be a weakness of “The Pitboss” and allowed Witwer to pull away. The buzzer was already a known weakness for “The Warrior” however, and allowed Napzok to pull things back, with the scores level with just a few seconds left. The clock ran out halfway through the next question, Witwer suddenly had the fast hand and with a correct answer he took the Star Wars Title from Ken Napzok and wrote his name into Schmoedown history books as the winner of the first ever Iron Man and the 2ⁿᵈ Star Wars Champion.

If ever there was a match that looked a foregone conclusion before it began, this was it. Andrew Ghai’s claims of being “the Ghai who beat the GOAT” drew Dan Murrell out of retirement to challenge him to a match at Collision – Ghai’s first match in the Singles Division. What followed was about 20 minutes of craziness as “Dastardly” Drew Ghai showed the GOAT just how much the game had changed while he was gone, going full heel at the table and exploiting the former champion’s rustiness to come away with not just a win, but a TKO. The silence of the crowd as the match progressed showed just how stunned everyone was and as Ghai jumped up on the table to celebrate his win, you could see in Kristian’s face his dreams of a Murrell v Levine live event going up in smoke!

When the Shirewolves first won the vacant Teams Titles by defeating Sick in the Head, there were plenty of trolls who refused to acknowledge their titles due to not facing any so-called elite teams in their title run. That talk largely came to an end after their match at Spectacular III against Who’s the Boss. Mark Reilly and Ben Bateman had become an elite pairing during Anarchy and led after the first 2 rounds. However the Shirewolves hit back to take a 3 point lead into the final round. Bateman and Reilly went perfect on their 2-, 3- and 5-pointers, but Rachel Cushing and “Classy” Clarke Wolfe did the same to defend their titles 34-31 in what was my pick for the best match at Spectacular III. Oh and let’s not forget the Shirewolves’ entrance celebrating women in film and the Schmoedown, and the aftermath of this match, with Andrew Ghai tackling Ben Bateman to kick off the Action Civil War.

Tim Etheridge Big fan of sports, Star Wars and the Schmoedown. Follow Eyes on the Ball for sports and Schmoedown thoughts and The Canon Padawan for Star Wars talk
Published March 10, 2020March 10, 2020