Fans watching the Schmoedown Throwdown #1 Contender Match between KOrruption and The Family were left shocked in the post-match as Drew McWeeny announced that he would be stepping away. This leaves Andrew Ghai without a partner after having come so close to a shot at the Teams Title, which seems his best shot of winning a belt. Only time will tell what will happen, but right now the make-up of The Usual Suspects gives the opportunity of creating a team that we almost saw in 2019’s Anarchy Tournament: Andrew Ghai and Jeannine “The Machine”.

This was a team created in the second drawing of teams after The Shirewolves’ Title victory meant that they were no longer eligible for the draw. How would they have done? I think that they are 2 quality operators and the team could go far, but I do wonder if their strengths and weaknesses would be too similar to compete against the elite teams. Thinking of the alternate timeline where Drew and Jeannine teamed up for Anarchy made me begin to think of some of the other teams that we almost had through the years and how they could have impacted the league.

Which of these teams would you have loved to see? 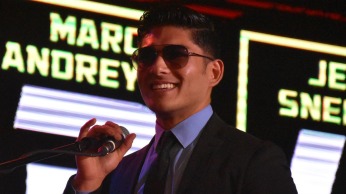 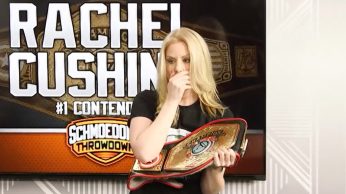 Drew’s teammate in the original Anarchy draw was none other than Rachel Cushing, and I can’t even begin to imagine how this team would have performed. Rachel is one of the greatest competitors in the league, studying hard to add to her already impressive knowledge. The one potential weakness for her was always getting in front of a crowd, but having someone like Andrew Ghai as her partner would have taken this pressure off her as he would have been able to take the focus and allow her to zone in on the trivia. He may not be Clarke Wolfe, but Ghai would be a strong B-player on this tea and I think that they could’ve gone far. But the thing that would have been most interesting would have been seeing how the pair gelled together. Rachel was the ultimate babyface, whereas Ghai was firmly planting his flag as one of the greatest heels the league had ever seen. Would Rachel have been able to draw Drew to the light side? Would Drew be able to corrupt Rachel? We may never know…

JTE may not be winning any spelling tournaments, but is one of the best competitors in the Singles and Teams Leagues

One of the famous moments from Season 3 is The Decision. Clarke Wolfe was one of the rising stars of the league and had attracted the attention of JTE, who was fed up of carrying Finstock. JTE asked Clarke to team up with him, but she turned him down in favour of Mark Reilly, creating the Wolves of Steel, leaving JTE to pair with Jeff Sneider and create the Patriots.

Now in hindsight, it can be argued that the right decisions were made, as JTE and Sneider’s 9-0 run (including 6 consecutive title defences) is unlikely to ever be matched as they became the spine that held the Lions Den together, and while the Wolves of Steel maybe never reached the heights people expected, Reilly’s retirement led to Clarke joining Rachel Cushing to create the Shirewolves and finally win a belt.

That said though, Clarke and JTE feels like it could have been one of the original power teams, with JTE’s knowledge of categories like Sly & Arnie overlapping well with Clarke’s knowledge of Horror. I can’t help feel that the early matches for this pair may have gone even better than they went for the Patriots! And more than anything, we may have seen JTE remain “Every Man’s Hero” rather than be corrupted to “Little Evil”. 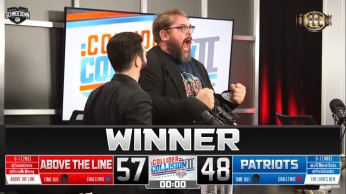 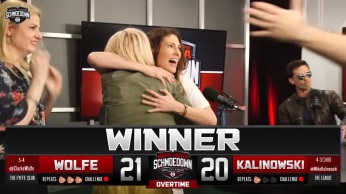 Ghai & Cushing wasn’t the only Anarchy team we were denied by the Shirewolves’ winning the belt, as the initial draw had also created the pairing of Clarke Wolfe and Drew McWeeny… and what a team it would have been! McWeeny was one of the most knowledgeable in the game, and Clarke would have just added to the knowledge while also bringing more of a competitive and strategic side. I think that this team would have been able to do what Take The Cannoli and The Family were eventually unable to do: get Drew McWeeny his belt back.

Before you say it, I am fully aware that this actually was a team. Season 2 saw the Ultimate Schmoedown Champion Mark Reilly and Movie Fights Champion Dan Murrell join together to for the appropriately named Team Champs, but they had a short run, losing in their second match to Top 10. Then going into season 3, Mark Reilly went his own way and eventually teamed up with Clarke Wolfe. But what a team they could have been if they had stayed together. Murrell and Reilly were the two first 2-time Singles Champions, so to have the pair working together in the Teams Division could have potentially seen an early dominance that eclipsed that of the Patriots. Even in today’s league, I think they would be up there pushing for the title”

With both of them joining the new-look Horsemen after coming out of retirement, I thought that we may see Team Champs return, but Anarchy saw them broken up and forming successful teams with John Rocha and Ben Bateman. Had Matt Knost stayed in the league following the end of the season, we may have seen Team Champs reform, but with him leaving, it made sense for Murrell to stick with John Rocha and Reilly to stick with Bateman and eventually bring him into the Horsemen.

Tim Etheridge Big fan of sports, Star Wars and the Schmoedown. Follow Eyes on the Ball for sports and Schmoedown thoughts and The Canon Padawan for Star Wars talk
Published March 24, 2020