Looking back on Free4All IV

Having been one of the first casualties in the Schmoedown calendar due to the COVID-19 pandemic, the Free4All made its grand return at the weekend under the leadership of President Grace Hancock and Commissioner Jay Washington.

40 Schmoedown Pros took their chance to represent their faction – with The First Class League’s Zafletinflouse somehow sneaking in at the end, and after 24 rounds (including 2 which went to a 3-answer Sudden Death), Paul Oyama came away as the winner of Free4All IV, earning a title shot of his choosing that could really help get S.W.A.G.’s season back on track, with The Dungeon’s Ben Bateman picking up 3 points for an MVP performance. 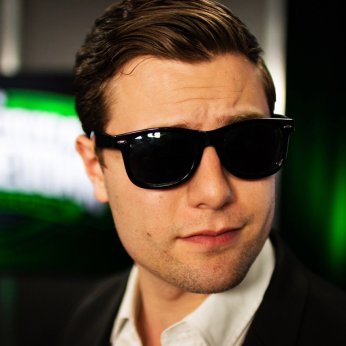 It feels like Ben Bateman and John Rocha have been rivals forever, with Bateman’s time in the Horsemen marked by never really having won over “The Outlaw”. However “The Boss” has always had the better of him in previous Free4Alls, being on the table when Rocha was knocked out in both Free4All II and III.

It certainly looked like Rocha was trying to get in Bateman’s head early with a low blow comment about his parents, but Bateman certainly came out the stronger, with Rocha eliminated in just 2 rounds. Perhaps the highlight of this spell was a Movie Release Dates question where Bateman boldly stated that the Oldlaw would get the answer wrong, while he and Brendan “The Kid” Meyer would get it right, with “The Boss” being proved right just seconds later.

The Outlaw may consider himself the GOAT, but it looks like he has Bateman living rent-free in his head, which could lead to a great match-up later in the season.

One of the matches in the week leading up to the event saw rookies Jacoby Bancroft and Jacob Blunden face off in their debut. Both put in incredible performances, but Bancroft came out with the victory in a match that saw him finish with 100% PPE.

Well “The Aussie” didn’t have to wait long for his revenge, coming into the event against Bancroft, William Bibbiani, Griffy Newms and Liz Shannon Miller and promptly clearing the table by getting a perfect 5/5 while everyone else could only manage 4 – a moment which ended up being named Moment of the Match.

Bancroft’s 90% accuracy over his 2 rounds was level with Ethan Erwin as the highest accuracy in the event (no minimum number of answers), so don’t be surprised to see these 2 meeting again down the road in the league’s newest rivalry.

As mentioned above, the highest accuracies of the event went to Ethan Erwin and Jacoby Bancroft, who both finished with 90% accuracy – a timely reminder that in the madness of the Free4All, even going 4/5 in a round is no guarantee of safety.

Griffin Newman (aka “Downtown” Griffy Newms) gave more evidence in support of his high draft placement by competing in 6 rounds and still having a 4/5 round when he exited as part of XXX5X. Duringthis spell, he outlasted established names like VIDEODREW, Marc Edward Heuck and former Teams Champion JTE, while he as eliminated alongside Bibbiani and Miller.

Finally, a mention for Kim Taylor-Foster, who made her Schmoedown debut in this event and put in a strong showing. With 10 correct answers out of 15 questions and no round under 60% accuracy, it certainly seems like she may have the Midas touch when given the chance.

A taste of the big league

While the appearance of Zaflertinflouse was a welcome surprise at the end of the event, it’s certainly left me hoping that this won’t be the last time we see the Schmoedown and the First Class League overlap.

While it’s likely that many of the Free Agents we see picked up this year will likely come from the FCL, I think that the Free4All is a great opportunity to get some extra recognition for the development league by perhaps having 5-10 of the top competitors from the FCL also included in the Free 4 All. Not only would it be a chance for the fans to see the cream of the FCL crop, but it is also a chance for FCL competitors to take the step up to the Schmoedown in a fun and relatively low-stakes arena.

On the hot seat

While we may not have had dedicated seats this time due to the virtual environment, I still tried to track what seat each Schmoedown Pro would have filled had everything gone exactly the same in the live environment. 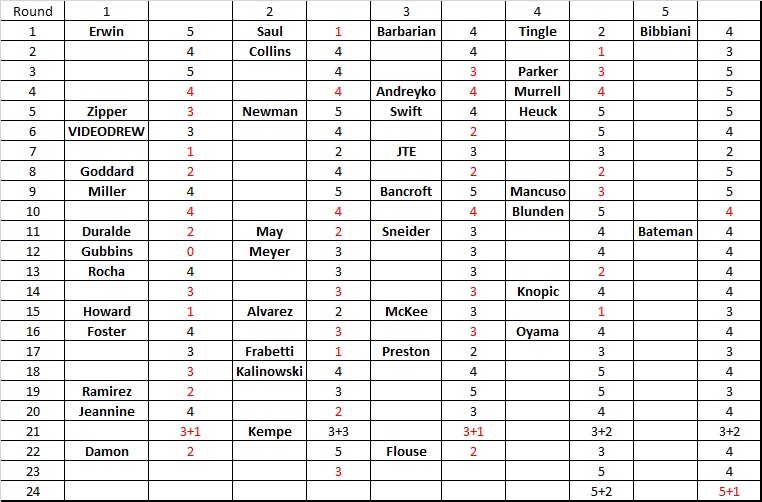 As is pretty clear from this graphic, what would have been Seat 5 was the place to be, with just William Bibbiani and Ben Bateman filling (or standing by) the seat through the entire event. In contrast, Seat 1 proved to be the unluckiest, with 13 different Schmoedown Pros taking this seat in just 22 rounds, with only Ethan Erwin and Kim Taylor-Foster managing to last more than 2 rounds at this position.

Tim Etheridge Big fan of sports, Star Wars and the Schmoedown. Follow Eyes on the Ball for sports and Schmoedown thoughts and The Canon Padawan for Star Wars talk
Published April 26, 2021April 26, 2021