We may have only just put the Free4All in the rear-view mirror, but tournament season is starting early this year in the Movie Trivia Schmoedown with smaller, more frequent tournaments. The first of these will be the Teams Tournament, which kicks off on Thursday. Each faction will be represented by a team, with the winners facing off against KOrruption in a #1 Contender Match.

The Teams taking part are:

Regular readers will know that I love to put my credentials as a Schmoedown reporter on the line whenever we get a bracket by trying to predict how it will play out. Last season, most of my brackets were busted within 1 or 2 matches, so let’s see how I can do this time! 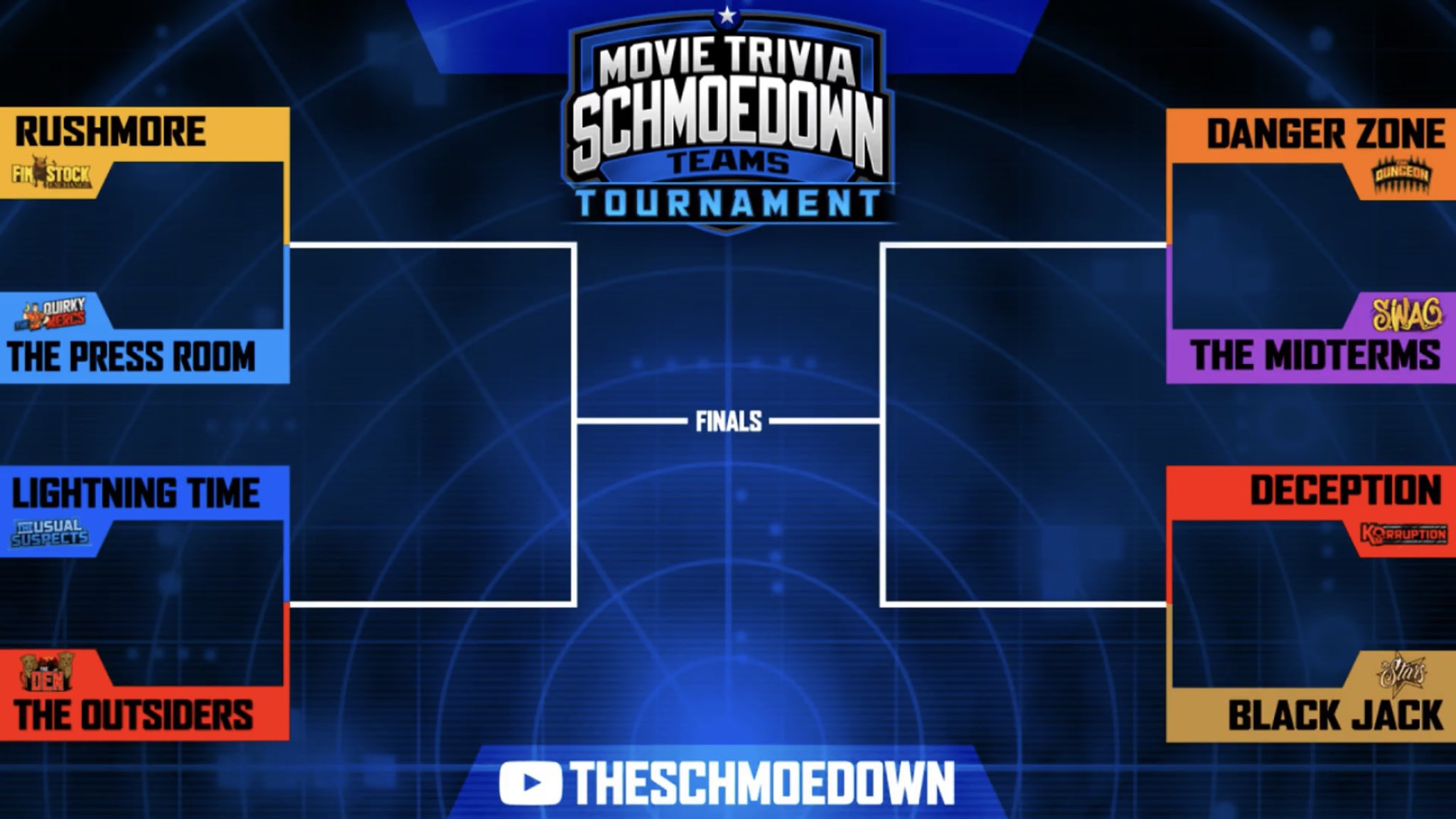 Rushmore v The Press Room: JTE may have put in an impressive performance recently against Ben Goddard, but I can’t imagine many people would argue that John Rocha has upgraded teammates having moved on from Dan Murrell. Personally, I was expecting to see The Barbarian partnered with Rocha to form the faction’s marquee team, and I can’t help wonder if this decision will harm them in the long run. That said, one thing they do have over The Press Room (The Mercs’ second team, with Shazam! already challenging for a title) is pedigree, with both Rocha and JTE having belts in their past, while Perri Nemiroff is still relatively inexperienced and Josh Horowitz will be making his debut in this match. If Rocha or JTE has an off day then maybe the lack of tape on Horowitz will see The Press Room advance, but Rushmore come into this match as the favourites.

Lightning Time v The Outsiders: A partnership that I predicted when I suggested that Liz Shannon Miller would be lured to the Usual Suspects, Lightning Time looks like a powerful team, with former Singles Champion Ethan Erwin being paired with Liz Shannon Miller, one of Season 7’s surprise packages. Both are strong competitors and as friends, you would imagine that they will have a good chemistry. They face the leaders of The Den in Ben Goddard and Paul Preston. Goddard was on course for Rookie of the Year in the early half of the season but became a forgotten figure after not featuring in the Teams or Singles tournaments, while Paul Preston has so far struggled to reach the heights he expects. While Lightning Time probably go in as favourites, I think that Ben and Paul have the potential to go toe to toe with them, and with IG slices now fair game in Round 2, Ben Goddard’s flexibility may come in crucial. Maybe I’m going heart over head here, but I have The Outsiders coming out with the win.

Danger Zone v The Midterms: Comprised of one of the most strategic minds in the Schmoedown and the GOAT, I genuinely think that Danger Zone has the potential to become the strongest team in Schmoedown history. As such, that would make them a test for any faction’s marquee team, but Final Exam weren’t eligible and instead they face an untested pairing of Eric Zipper and Jonathan Harris. Zipper is a good player, and his knowledge of IG categories may give him some small weapon, but Dan Murrell has flirted with entering the division enough and lives with the current IG Champion, so it’s hard to imagine Zipper gaining much of an advantage. His partner Jonathan Harris certainly started his Schmoedown career well, but never seemed to truly recover after he and brother Lon were routed by Bateman’s old team Who’s The Boss. frankly, I’m surprised that Vinnie Mancuso wasn’t given the job of partnering Zipper. I’ve got Danger Zone winning by TKO.

Deception v Black Jack: The only team in the tournament to have played together before, Deception looked the real deal in last year’s tournament. They will have a tough test against Black Jack, with Jeannine being a much stronger competitor than her 5-6 Singles and 2-2 Teams records suggest, while her partner Jacoby Bancroft showed his quality last week with a 100% PPE performance against Jacob Blunden and 90% accuracy in the Free4All. I see this one going the distance, but think that Adam Collins’ and Lady Justice’s experience playing together last season will see them emerge victorious.

Rushmore v The Outsiders: This will be an interesting one as I can’t help think that after beating Lightning Time, The Outsiders may consider this a slightly easier opponent as I feel that Goddard’s Innergeekdom knowledge may actually prove even more crucial in this match, while he has shown that he can go toe to toe against JTE and Paul Preston certainly has the quality and range of categories to take on Rocha. I can see this coming down to who gets what on the Wheel, but I have The Outsider’s continuing on to the final.

Danger Zone v Deception: What a treat this will be for the fans, with the 3 most recent Singles Champions all involved. Collins and Murrell have already shown that there is nothing much between them so I can see this coming down to Bateman v Marisol. Lady Justice is a fantastic competitor but right now, I’m not sure she’ll be quite able to keep up with the other 3 (though I doubt she will be far off). I’ve got Danger Zone advancing to the final.

The Outsiders v Danger Zone: And so we reach the final, and this is where things get interesting. Usually a final would be a 5-round match, which I would see giving Danger Zone a heavy advantage due to their experience of the format. However, this will be a 3-round match, which goes some way to even the playing field. Paul Preston will certainly be up for revenge after Bateman controversially knocked him out of the Singles Tournament in 2017, but will they have an answer for the power of Danger Zone? I have the Dungeon’s finest coming out with the win to set up a mouth-watering match against Mike Kalinowski and Chance Ellison.

Do you agree with my picks? If not, how do you see the tournament panning out?

Thanks for reading. Until next time!

Tim Etheridge Big fan of sports, Star Wars and the Schmoedown. Follow Eyes on the Ball for sports and Schmoedown thoughts and The Canon Padawan for Star Wars talk
Published April 27, 2021April 27, 2021