Welcome to Sport on the Silver Screen. In this series, I will be looking back over sports movies that I have recently watched/re-watched and giving my thoughts on them. Getting into the Schmoedown and starting to follow a number of the personalities from the show has given me a much greater appreciation of movies and seen me starting to watch more.

Being a fan of both movies and sports, I have taken the chance to start highlighting the sheer volume of sports movies out there. For each movie I will be giving some details about the movie and then a quick review, including a section giving a sports fan’s perspective of the action’s realism.

Now, today I’m doing something a little different, by looking at a recently released documentary that is currently available to watch on Amazon Prime: Oceans Apart: Greed, Betrayal and Pacific Island Rugby 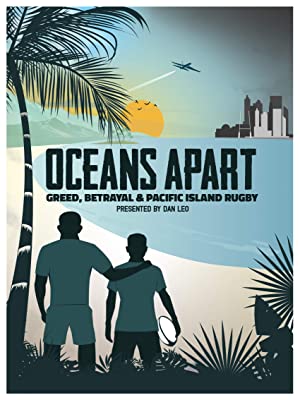 Synopsis: Former Samoa captain Dan Leo looks at the issues faced by Pacific Islands rugby players to see why these nations that are responsible for so many of the game’s superstars are struggling so much on the world stage.

This was a fantastic documentary and a real eye-opener. As a fan of rugby in general, I have been so disappointed to see the way that the Pacific Islands – especially Samoa and Tonga – have struggled over the last couple of decades as rugby has gone professional. So many times, I’ve been disappointed to see players from the Pacific Islands choosing to play for Tier 1 nations where they may earn just a handful of caps, rather than playing 40-odd times for the country of their birth – a notable example being Charles Piutau, who won 17 caps for New Zealand but had not played international rugby since 2015. Watching this though made me really begin to understand why the players choose to play elsewhere as there is limited financial incentive to play for the Pacific Island nations.

As the documentary explains, Dan Leo was the captain of Samoa when the team threatened to boycott a match against England at Twickenham in 2014 due to financial discrepancies within the Samoan Rugby Union, as publicly-funded money was not reaching the team. The game eventually went ahead with the promises that everything would be investigated, but nothing ever came of it bar a few headlines at the time, and Leo found himself omitted from the squad moving forwards. Leo was not the only influential Samoa player to be dropped from the national team following criticism of the union, which is headed by the Prime Minister, and the way that funds are used.

In this 1 documentary, Leo really highlights the impact of the lack of funding – showing a player who has been left to fend for himself in Romania after losing his contract due to a kidney issue while also updating us on what happened to Fijian wing Rupeni Caucaunibuca, who was one of the stars of RWC2003. As we follow his investigations, which also involve interviews with a key members of the rugby community, including James Haskell (who played in the 2014 match against Samoa), Ben Ryan (who coached Fiji to Olympic Rugby 7s Gold), outspoken Samoan centre Eliota Fuimaono-Sapolu and a number of Pacific Islanders who play in the Premiership and Pro14, the issues become clear.

As the documentary shows, many of these unions are led by people who could be considered problematic due to their role in the nation’s government, but as the documentary shows, the issues go beyond the national unions and to the way that the nations are treated by World Rugby, who clearly favour the “Tier 1” nations, with Brett Gosper (who was at the time CEO of World Rugby, but will now be stepping down to take up a role within the NFL in the New Year) coming across very poorly in an interview.

I won’t say any more about this, except that this should be a must-watch for all rugby fans, and that hopefully this will lead to pushes for change that will give more support to nations outside of Tier 1.

What did you think of the documentary? Let me know in the comments. Until next time!