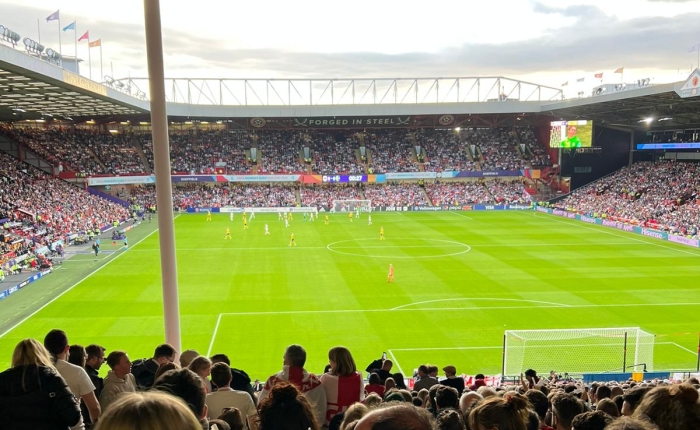 I’ll keep this one brief, because first of all, I wouldn’t consider myself even close to an expert on the subject, and second, because even 24 hours on, I’m still struggling to find the right words.

In 1996, 30 years on from England’s World Cup triumph and with the European Championships coming up in England, David Baddiel, Frank Skinner, and The Lightning Seeds released the song “Three Lions” with the hope that 30 years of hurt would end with Terry Venables’ England would go the distance and in their first major trophy since 1966. England eventually fell to Germany in the semifinals on penalties.

But last night, Sunday 31ˢᵗ August 2022, I watched on with barely-controlled emotion as, after 56 years of hurt, England won a major tournament. But it wasn’t Harry Kane and his gang of millionaires. Instead it was Leah Williamson’s Lionesses as Chloe Kelly’s 110ᵗʰ minute goal secured a 2-1 victory over Germany (of all teams!) after extra time in the final of the UEFA Women’s Championship!

The Lionesses have made the country proud. But much more than that, they have helped take women’s football to a new level, with packed stadiums throughout the competition ending with a crowd of 87,192 fans watching at Wembley (a European Championships record, regardless of gender) and a a peak BBC One television audience of 17.4 million making it the most-watched women’s football game on UK television.

At a time like this, you must spare a moment for those who came before. The Steph Houghtons, the Alex Scotts, the Kelly Smiths… those who played and represented their country at a time when there was less support and visibility. They set women’s football on the path and were the heroes the current generation needed to encourage them to take up the sport and then make a career out of it. Now the vital thing is that this is seen not as the destination, but simply the next step on the road to making women’s football equal to the men’s game.

We are clearly making strides. Women’s football is getting more coverage and it sounds as if FIFA 23 will even be giving the women’s game a lot more focus that previous iterations, which only recently began to feature a handful of national teams. But the key is to keep the momentum, with fans now going to WSL games—let’s be honest, they’re bound to be much less expensive than Premier League games—while it is also important that sponsors and broadcasters continue to give more and more focus to the game. One shot fired at the England squad was how white it has become, as the increasing professionalism has seen the clubs move their training bases to more affluent areas, which leaves girls from poorer areas unable to afford travel to training, and so it is vital that money continues to come into the game so that solutions can be found to stop this being an issue.

20 years from now when I’m an old man and talk about this Championship, of how Beth Mead came back from Olympics snub to become Player of the Tournament and win the Golden Boot, I hope that I will not be looking at one shining moment in English football, but instead remembering how this was just the next step in the growth of women’s football. After all, it’s Her Game Too.