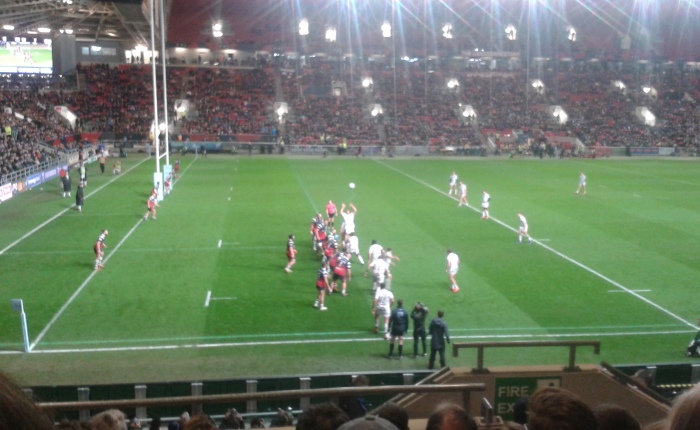 We are one week on from the end of Scotland’s summer tour to South America. A series that saw a strong Scotland A team take on Chile as the South Americans prepared for their 2-leg playoff with the USA—which they won to secure the Americas 2 spot at RWC2023—before the first choice team (minus a few regulars) faced Argentina in a 3-Test series, which saw a last-gasp try from Emiliano Boffelli secure a 2-1 series win for the Pumas to kick off Michael Cheika’s tenure as head coach.

And so, as we spend this period after the Summer Tours patiently waiting for the beginning of the Rugby Championship, it’s time to look back over the tour to create my combined XV. Unfortunately, I was unable to see the match between Scotland A and Chile, so this will focus purely on the Test series with Argentina,

Who do you think should have made the XV? Let me know in the comments below.

My combined XV from Scotland’s 3-Test series against Argentina is:

1) Nahuel Tetaz Chaparro: Was hard to separate anyone out from the pack here, but what really stuck in my mind was the way that Tetaz Chaparro followed up 2 starts with a strong performance off the bench to help pull the Pumas back into the final Test and flip the momentum in their favour.

2) Ewan Ashman: A solid but not spectacular series for Julián Montoya, who missed the decider, while Scotland rotated their hookers with each getting a start and an appearance off the bench. As such, the most notable performance was that of Ewan Ashman, who put in a solid all-round performance—including 2 tries, one of which highlighted his threat in the loose—to put Scotland in a position where they should have held on to win the final Test.

3) Zander Fagerson: I wonder if Fagerson actually gets the recognition he deserves on the international stage. Was solid in the scrums through the series and showed his quality with ball in hand during the fina Test.

4 & 5) Guido Petti & Grant Gilchrist: Petti played a crucial role in the set piece, with a number of crucial steals at the lineout. Meanwhile, Gilchrist did a solid job in the second row, while also took on the responsibility of captaining the team with a number of Scotland’s most experienced players given the summer off.

6) Rory Darge: Made an immediate impression on his debut Six Nations and carried on where he left off in Argentina. Darge is a turnover machine, and it will be very hard to drop him from the XV, which is crazy to think considering how locked in the pairing of Jamie Ritchie and Hamish Waston has been.

7) Hamish Watson: Celebrated reaching his half-century of caps out in Argentina and will surely go on to earn many more. missed the opening Test, but came back with 2 solid performances. You always know what you’ll get from him: a tireless engine, reliable tackling, crucial turnovers and hard carrying.

8) Matt Fagerson: Appears to have secured the number 8 spot in the Scotland squad in recent matches and is certainly becoming more influential in the team. Carried well throughout the series to help put the Scots on the front foot.

9) Gonzalo Bertranou: Wasn’t even intended to be in the wider squad this summer but ended up starting the first few Tests and coming off the bench in the finale. Played well in the first 2 Tests and helped spark a comeback in the decider. Took his opportunities well to score 2 tries.

10) Santiago Carreras: Maybe I have some bias here as a Gloucester fan, but in a Test series where both of the main 10s were transitioning to the position from 15, Carreras was more consistent that Blair Kinghorn, though he didn’t have to worry about goal kicking. Ran the game well and took his moments to score 2 beautiful tries. Regardless, I still feel that he is better at 15 than 10.

11) Duhan van der Merwe: Was quiet in the first Test, but when Scotland actually started paying more rugby he became a real threat. Carried well and was fully deserving of his try early in the decider.

12) Sam Johnson: Like many Scottish players, he was wasted in the opening Test as they kicked too much ball away, but came into his own as Scotland started playing more attacking rugby. Scored off a lovely crash ball line in the second game.

13) Mark Bennett: One of Scotland’s best players in the series, it was great to see him back paying consistently and he was on top attacking form. Scored 2 very different, but equally impressive tries, beating his man on an outside arc in the first Test and taking a much more direct line from deep in the second.

14) Bautista Delguy: Had limited minutes as Michael Cheika looked at his options, but managed to get more involved than many of his fellow wingers. Made a number of breaks and half-breaks while continually keeping the Scottish defence guessing.

15) Juan Cruz Mallia: Missed the second Test but looked dangerous in both other matches. Found space to start a number of attacks returning kicks.